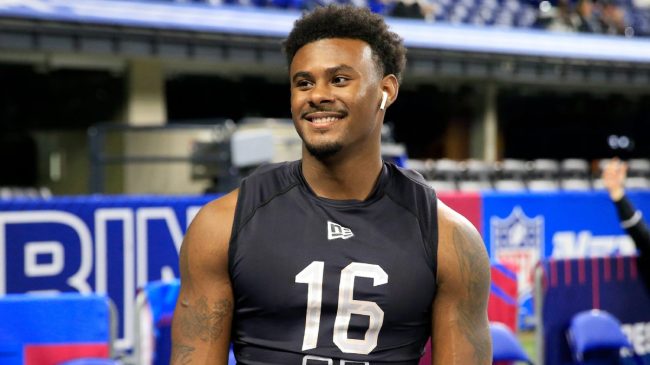 Malik Willis is hoping to hear his name called in the first round of the NFL Draft.

The quarterback is one of the top passers on the board, with many projecting for him to land near the end of Thursday night’s draft order. The Liberty star was on hand for the event, attending the festivities with family.

Willis began skyrocketing up draft boards after a fantastic final season. After beginning his career at Auburn, the signal caller transferred to the Flames where he played his last two years.

Last season, he threw for 2,857 yards and 27 scores while adding 878 yards on the ground. A dynamic player, he can beat you with both his legs and his arm.

He also showed off his great character at the NFL Combine, going viral in a video of him giving clothes to someone on the street. His performance on the field further solidified his standing as he made some insane throws.

Prior to Thursday’s draft, Willis took some time for photos with family and friends. One of those pictures was with him and his grandmom. In a hilarious slip, the NFL Network social media team mistook his grandmother for his mom.

NFL Network posted a photo on Twitter with the caption, “The proud look Malik Willis’s mom is giving him.”

Unfortunately, it wasn’t his mom.

The woman was actually the quarterback’s grandmother, leading to a hilarious exchange between Willis and the NFL account.

Willis was a good sport and he hilariously replied to the NFL Network post.

He adds a couple of laughing emojis for effect.

NFL Network continued the exchange, apologizing for the mistake.

Regardless of the error, Willis is hoping to make an impact at the professional level. Hopefully this is a draft night to remember. The quarterback has already said he plans to buy his mom (not grandmom) a car with his first paycheck.

He should make an immediate impact wherever he winds up.