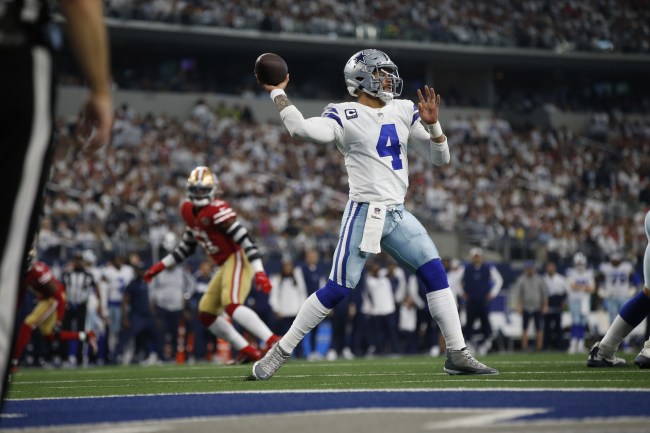 We all knew it was coming. Dak Prescott wasn’t going to escape punishment from the NFL. Now we know exactly what that punishment will be.

Dak Prescott has been fined $25,000 for his postgame comments related to the game officials, per source.

The Dallas Cowboys had a strange ending to their game against the San Francisco 49ers on Sunday. With 14 seconds left on the clock and no timeouts remaining, the Cowboys called a designed run for Dak.

After he slid down, the team rushed back to the line to spike the ball. They spotted the ball themselves and Dak ran to get behind center, but got in the way of the ref, who needed to be the one to spot the ball, and the clock expired before they could snap the ball.

The fans did not respond well to the game’s officiating, throwing objects at the refs after the game. When Dak was told about this, his response was “a credit to them then.”

It was a comment that was widely criticized in the sports world and even led the NBA’s referees to encourage the NFL to punish Prescott. Dak did take to Twitter this week to apologize for the comments.

I deeply regret the comments I made regarding the officials after the game on Sunday.

I was caught up in the emotion of a disappointing loss and my words were uncalled for and unfair.

I hold the NFL Officials in the highest regard and have always respected their professionalism and the difficulty of their jobs.

The safety of everyone who attends a game or participates on the field of a sporting event is a very serious matter.

That was a mistake on my behalf, and I am sorry.

It wasn’t enough to save Dak Prescott from a $25,000 fine. Hopefully this prevent any other players from condoning this kind of behavior from fans.