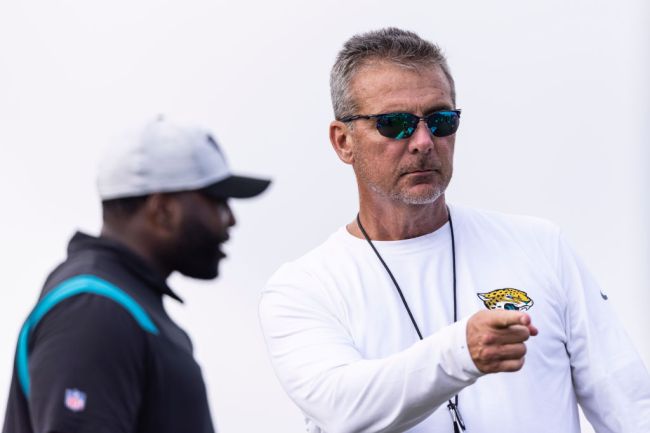 Jacksonville Jaguars head coach Urban Meyer turned heads during his Tuesday press conference with his comments about cutting players with their vaccination statuses in mind.

Meyer admitted that whether or not a player was vaccinated did play a part in keeping or cutting certain players.

“Everyone was considered,” Meyer explained. “That was part of the [considerations such as] production, let’s start talking about this, and also is he vaccinated or not? Can I say that that was a decision maker? It was certainly in consideration.”

The NFL Player’s Association (NFLPA) isn’t too pleased with Meyer’s comments as Mike Florio of Pro Football Talk has reported that the NFLPA is planning to open an investigation. The NFL has stated that players can not be released based solely on their vaccination status. It’s worth noting that the NFL and NFLPA haven’t exactly seen eye-to-eye when it comes to most things regarding protocols involving the virus.

You’d have to be pretty gullible not to think every organization around the league isn’t looking at the vaccination status of every borderline roster guy that is expendable to cut numbers down to 53 players. Meyer simply said something in front of reporters that every coach is saying behind closed doors. Also, Meyer specifically said that vaccine status was just a piece to the puzzle when it came to cutting certain players, not the only factor in play.

Statement from the @Jaguars: pic.twitter.com/H69pKT3art

Former NFL coach Tony Dungy jumped on Twitter to defend Meyer’s comments, while other fans shared their reaction to the news as well. The majority of NFL fans seem to be defending Meyer.

Was there anything wrong with what Urban Meyer said Andrew? He said that vaccination status was “a factor” in decisions. When these rules were instituted did anybody in their right mind think vaccination status would not be considered at all? https://t.co/GwSNnQwhv8

NFL rules regarding vaccination are designed to punish teams, collectively. This makes personnel decisions an issue. It’s not a secret. Him saying it’s an issue is absolutely correct, and true.

He is a breath of fresh air. The truth hurts sometimes.

There is nothing wrong with this… Teams try to attain a competitive advantage at all levels, so ensuring that the team can play (and, therefore, avoid defeat) is just as smart as cutting a guy who can't physically perform. https://t.co/Lw8McTJPxM

Back in early May, Buffalo Bills GM Brandon Beane was the first big-time front office member to admit he would consider cutting a player based on their vaccination status. This reportedly resulted in him getting a phone call from the league explaining to him that shot status can’t be the only factor when it comes to cutting a player.