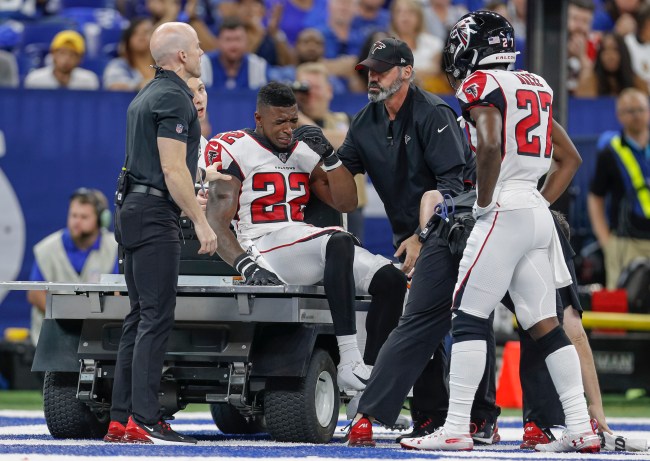 NFL refs are absolutely, positively terrible. Whether it’s a missed call, a guy in a zebra shirt blatantly telling an opposing defender to “stay off of Tom (Brady)” or another NFL ref actually admitting to a guy like J.J. Watt that the defender was held on a play, but a flag still wasn’t thrown, we all know of recent examples of the people in charge of calling a “fair game” absolutely messing things up.

And, look, I get it, NFL refs are under a lot of pressure. Not only are they responsible for getting things right — which is never going to be 100 percent — but they’re, arguably, the most scrutinized people in all of sports. But, sometimes, they probably shouldn’t try to carry out the letter of the law all the time.

Case in point? During yesterday’s Atlanta Falcons-Indianapolis Colts game, when Falcons safety Keanu Neal went down with a serious injury, which ended up being a blown Achilles.

After coming down awkwardly and immediately knowing something popped in his lower leg, Neal was visibly hurt, upset and in absolute agony, rolling around on the turf. In that moment, he removed his helmet — which is probably what most of us would do in that position. Rather than give the guy a break given the circumstance, though, NFL refs were so uptight that they actually threw penalty flag on Keanu Neal because he removed his helmet on the field, costing his team 15 yards. The Colts ended up scoring two plays later, so the penalty (possibly) played a factor.

Feel bad for #Falcons Safety Keanu Neal, he suffered what could be a season ending injury [was carted off the field] and in addition the refs gave him a penalty for taking his helmet off after his injury. https://t.co/5sKIUbnqdP

This is beyond awful, guys. Of course, some will argue that NFL refs are just doing their job, as the NFL rule does state no player should remove his helmet on the field of play without consequence.

Per the NFL rulebook:

“Removal of his helmet by a player in the field of play or the end zone during a celebration or demonstration, or during a confrontation with a game official or any other player.”

Uh, yeah, not sure Keanu Neal was celebrating much of anything there. Just an awful job of officiating there.

Sure, NFL refs are supposed to enforce the law during the games, but doesn’t this seem low to you? Meanwhile, as refs tossed a flag on Neal in the Falcons-Colts game, we’ve got another guy in a different game legit guessing on where the spot of the football should be. So, yeah, as mentioned above, NFL refs are absolutely, positively terrible.