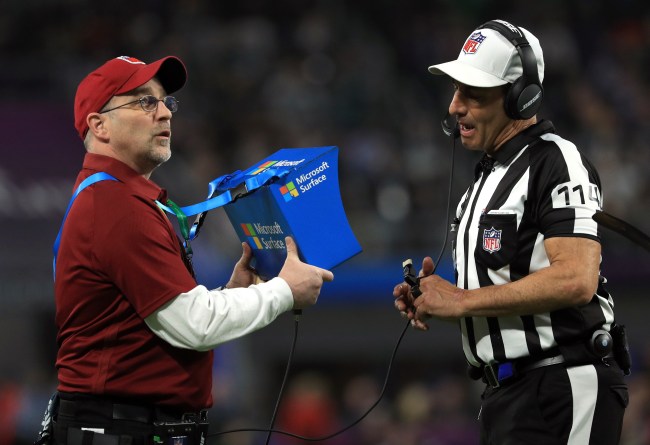 Lots of players, coaches and fans can probably all recount a time when the NFL Replay system totally screwed them over. Whether it was in a conference championship game (like the New Orleans Saints experienced in 2019), a playoff game (like the Dallas Cowboys saw happen to them in 2015), or simply a pivotal regular season game (like plenty of teams have had to live through since replay was reintroduced to the league in 1999), the thing just hasn’t been a reliable as many would hope it would be.

While the NFL Replay system has definitely had its flaws over the years, it’s better than the alternative — which would be botched calls by referees with no chance of something being overturned. Sure, most officials don’t want to admit a mistake on the field, but, thanks to a review, it can at least be considered.

However, what if something goes wrong? Like, what if the replay system crashed during a game, and video of a play wasn’t available for an official to review? What in the hell would happen then? Well, we could have found out during a Thanksgiving Day game in 2016 between the Minnesota Vikings and the Detroit Lions.

That’s because, according to former NFL V.P. Of Officiating, Dean Blandino, the NFL Replay system did actually crash — for a couple of minutes, anyway — as somebody was using a microwave to reheat leftover stuffing. No, seriously, that happened.

“We took the microwave and plugged it in, but they plugged it into the same outlet, the same circuit that the replay system was plugged into,” Blandino said. “So when they turned the (microwave) on the whole thing went down. So we were down for maybe like two minutes while they fixed it while the game was going on.”

“Thankfully we didn’t have any replay reviews,” Blandino said. “but we kind of shut down the system because we wanted to heat up the stuffing for Thanksgiving in the microwave.”

God, what an absolute shitshow this could’ve been. I’m sure the staffer who used the microwave was (hopefully) smart enough not to have tried reheating food during a pivotal point in the contest, but imagine if he/she had done this during a key drive or something. Talk about a PR nightmare that could’ve been on the hands of the league — which already frequently happens over replays anyway.

I can see the headline now: Zapped! NFL Replay Burns Itself During Vikes-Lions Game Over Leftover Stuffing

As Blandino said, thankfully he and his crew were able to fix the short circuit problem quickly and replay wasn’t needed during the game, but, man, they really got lucky the football gods didn’t curse them while it was down. Leftover stuffing, guys, you can never trust it.