NFL Says It Actually Did Review The Non-PI Call Late In The 49ers-Seahawks Game, But ‘Didn’t See Enough To Stop The Game’ 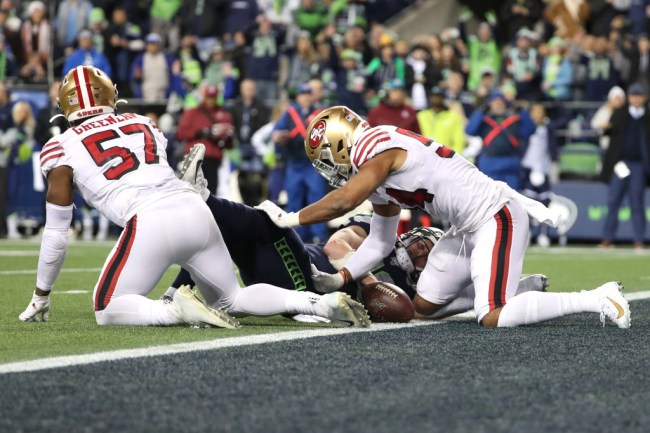 It was only fitting that the last game of the NFL regular season came down to the final couple of plays and the officials were involved, or I guess you could say not involved, in the 49ers’ 26-21 win over the Seahawks.

Facing a 3rd and goal situation from the five-yard line with 15 seconds left, Russell Wilson slung a quick pass toward Jacob Hollister in the endzone that fell incomplete. There was plenty of contact on Hollister, but no flag was thrown. The game wasn’t even stopped for any type of review on a possible pass interference call, but according to the NFL’s senior VP of officiating the play was actually reviewed in New York, but there wasn’t enough there to stop the game for an on-field review.

Whether it was a possible pass interference or defensive holding situation, there was clearly enough contact that could have warranted an on-field look. The fact they didn’t decide to stop the game was flat-out mindblowing.

Here’s the statement from the NFL’s vice president of officiating Al Riveron on not reviewing the play and why there wasn’t a flag thrown, per NBC Sports:

Wilson decided to go right back to Hollister on the very next play, but he was ruled just short of the goal line after being met by San Francisco linebacker Dre Greenlaw.

The Seahawks will now have to travel to Philadelphia to take on the Eagles in the wild-card round of the playoffs while the 49ers were crowned NFC West champions with the win.