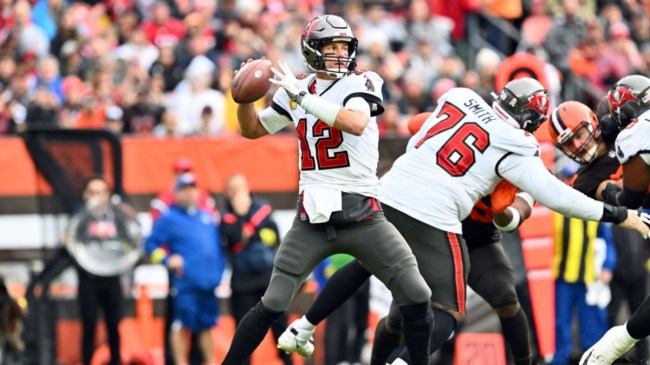 Despite currently leading the Tampa NFC South, the Tampa Bay Buccaneers have been one of the NFL’s most disappointing teams this season. Thanks in large part to the struggles of their offense, the Bucs are currently just 5-6 and are coming off of an overtime loss against a Cleveland Browns team that was well below .500 entering the game.

It has certainly not been the season the franchise would have hoped to have in the last year of Tom Brady’s contract.

Even with his stats dipping a bit this season and the team not living up to expectations, Brady will likely still garner plenty of attention if he hits free agency and decides to continue his NFL career.

Today, The Atheltic’s Jeff Howe discussed one interesting team that could be among those looking at Brady as their answer for next season. According to Howe, Brady could go back to the New England Patriots.

#Buccaneers QB Tom Brady, a pending free-agent, could return to the #Patriots next season, via @TheAthletic

Mac Jones could be traded in that scenario. https://t.co/PJtso6lLGg pic.twitter.com/oHcbWlw23V

The Patriots could be one of the top contenders to land a big name to play under center during the offseason. They’ll have a ton of cap space for the 2023 season and Mac Jones hasn’t given them much reason to continue counting on him next season.

While they would be an interesting option for Brady, there are some factors that make the move somewhat unlikely. First of all, he seems to be happy in Florida. Second, Mac Jones isn’t the only person responsible for the Patriots’ offensive struggles.

When Josh McDaniels left for the Raiders, the Pats didn’t bring in an offensive coordinator to replace him dither committee of Matt Patricia and Joe Judge hasn’t gotten the job done.

The team also doesn’t have much in the way of weapons on offense with their major expenditure on tight ends not paying off and a lack of a true WR1.

At this point in his career, Brady will only be playing for teams he knows are built to compete and it’s not entirely clear if the New England Patriots will fit that description next season.