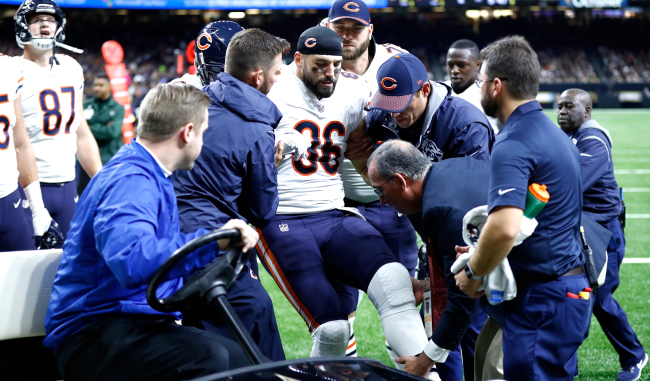 October 29th, 2017 is a day Zach Miller (and the many NFL fans who were watching the game) will never forget. That’s because during the Chicago Bears game against the New Orleans Saints that day, Miller suffered a devastating leg injury when he dislocated his left knee trying to catch a touchdown pass.

The Monday following the game, and Miller’s catastrophic leg injury, it was reported that doctors were concerned that the tight end was in some danger of being forced to have his leg amputated.

Miller’s knee dislocation was so severe and involved such extensive artery and ligament damage that there was almost no chance that he would return to the NFL. Fortunately, however, doctors were able to save his damaged leg.

After spending eight days at the University Medical Center in New Orleans, Miller issued a statement thanking the medical staffs of both the Bears and the hospital, as well as the surgeons who repaired his left leg.

This week, Miller sat down to discuss his grisly leg injury with his former teammate on the Chicago Bears, Jay Cutler, on his podcast Uncut with Jay Cutler.

“Did you know the severity or were you just like hey, I messed my knee up?” Cutler asked. “I mean, you know your body, I mean, mean most professional athletes, they know their body enough to know, hey, something’s wrong, but did you know what the next two months or the rest of your life was gonna…?

“No, no, I had no idea,” Miller replied. “Obviously I had been down the injury road before so I figured, like, tore my ACL. Like that was what the immediate thought was I tore my ACL.”

“Because it popped, it popped, your knee popped right back, right?” Cutler asked.

“So if that doesn’t happen I would have went, like, out and my leg would have just been, like, dangling. So it pops back in and I just thought I tore my ACL, whatever. I didn’t know the severity of it, I didn’t know the dislocation until I was on the… I’m on the stretcher and they’re oohing and ahhing and everybody’s saying, ‘hey man,’ giving me all well wishes, patting me on the back, blah blah.

“And Nate Breske, our head athletic trainer’s like, ‘hey, they’re reviewing the play, don’t look at the video board.” And I’m, like, when somebody tells you not to do something I look up, and I see the… so I’m like, oh, damn, like I had no idea, just the like the angle of it and they just they kept doing it, boom replay, replay, replay…

“I ain’t looking no more, like, sh-t, one time was enough, saw enough, and even then I still didn’t really know until we got back in the locker room,” Miller continued.

“We did x-rays, did all that stuff, and I’m holding my leg in place because when I let it go it like slides out and it hurts. So I’m holding it up, you know?

“So time passes and I start to lose feeling in my foot and it starts to go numb and they want to go do more x-rays. I was like, ‘guys I can’t feel my foot,’ but you know something’s going on let’s check it out.

“So we take it off and my foot’s blue and my leg is literally like the same size from my quad down to my ankle and they’re like ‘all right we gotta go.'”

After getting Miller to the ambulance he says he started to panic a little bit.

“Once I started losing feeling and I saw all the discoloration, I got nervous,” said Miller. “And that went into like, panic attacks, right? And we’re in the ambulance they were going to take me to a location that was about you know it was further than than I needed to go. I think it was, I don’t know how long. Doctors on our side and trainers said,’ we’re not going there.’ The level one trauma was five minutes away and they said that’s where we’re gonna go.

“And my operating surgeon was actually at buffalo wild wings with his kids watching the game,” revealed Miller. “He saw the injury happening he’s, like, ‘come on guys, we gotta go’ and he was already waiting for me when I got there.”

At that point, Cutler steered the conversation to just how serious Zach Miller’s leg injury was, to the point of almost losing his leg.

“The window they told me, like, seven, ten minutes,” said Miller. “Because my tissue had started to die already. I had been without blood flow for a decent amount of time, over an hour, and and longer before we got into surgery and at that point when you don’t have blood flow or oxygen to get to your tissue it starts to die and once it starts to die it gets to a certain point you can’t you can’t save it and the next best thing is you gotta lop it off and save the rest of your body or else everything will go.

“I got to the point where I think they were tired of hearing me and they just put me to sleep, because I remember I’m nervous, don’t cut my damn leg off, don’t do any of that, and they were like, ‘all right man you got to chill out and let us do our thing.'”

Afterwards, at some point in Miller’s recovery he shared some pictures with Cutler showing how nasty his injury actually was.

“I talked to you at some point and then you know you sent some pictures, and I mean they had to basically just cut open your [inaudible] and just let it drain out and I mean it was it was unbelievably gruesome,” said Cutler. “It’s insane to see what happens.”

After a unending 72 hour waiting period to see if the surgery worked (“checking the pulse in my foot hundreds of times a day”) and Miller would be able to save his leg, he was pronounced good to go.

Unfortunately, as Miller told 670 The Score’s Parkins and Spiegel recently, his left leg is “still numb from the knee down.”

“I got I’d say close to 50% of motion back in my foot to be able to walk without wearing the AFO brace that I used to wear to actually hold my foot up,” Miller admitted. “That’s good and bad, I don’t have to wear the brace anymore, but I got some nerve damage and all of that stuff.”

Listen to and watch Zach Miller and Jay Cutler’s entire fascinating conversation below.