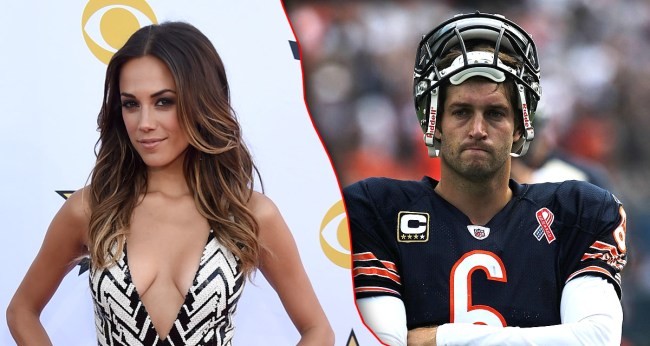 A couple of weeks ago, former NFL quarterback slash reality TV star Jay Cutler was talking on his new podcast, Uncut With Jay Cutler, about how tough the dating world is now that he is divorced.

Cutler, 38, was previously married to famous celebrity Kristin Cavallari from 2013 to 2020 after calling off their initial engagement in 2011.

“Meeting people is hard,” Cutty said on his show.

Perhaps Jay Cutler should have a talk with Aaron Rodgers. He seems to be doing great in that department.

So far, since he and Cavallari split, Jay has been linked to Fox Nation host Tomi Lahren and Southern Charm star Madison LeCroy.

Now, according to reports, we can add country music singer and actress Jana Kramer to that list.

Kramer, 37, was in the news recently for her very messy divorce from former NFL player Mike Caussin.

“So far it’s just been one date,” a source tells PEOPLE, adding that social media buzz Kramer was being shady by going out with Cutler because of an alleged friendship with Cavallari is unwarranted. “Kristin and Jana are just acquaintances and have only met twice. They’re not friends.”

However, another insider insists Kramer leaned on Cavallari — who a source confirmed earlier this month is dating country singer Chase Rice — during her difficult divorce from ex-husband Mike Caussin.

“Jay was trying to make Kristin jealous by going on this public date with Jana. He’s not happy she’s dating Chase and has been trying to get Kristin back,” speculates the insider, who adds that the Uncommon James founder has blocked the Whine Down podcast host on social media.

No way Smokin’ Jay would be so petty as to go out on a date with someone just to spite his ex-wife, right? Oh, right, that is something he definitely would do.

In June, Kramer told PEOPLE, “There have been a few DM slides … the game’s different for me now. I’m not looking to just have a fling. I want to find my person.”

Maybe Jay’s that guy. And if not, there’s another famous former athlete out there still looking for love she might want to consider.