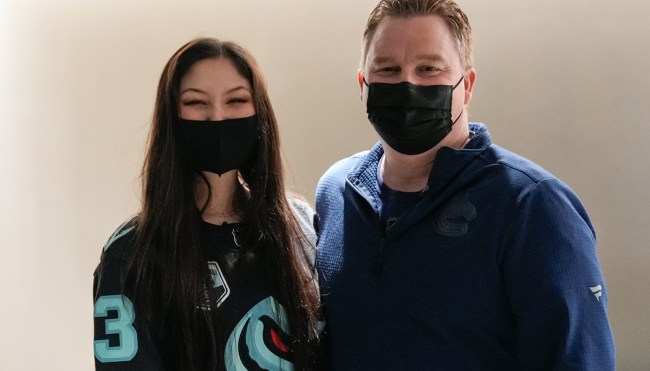 When the Kraken played their first-ever home game against the Canucks on October 23rd last year, Seattle fan Nadia Popovici entered the arena with the chance to witness a little piece of hockey history only to find herself at the center of one of the coolest stories you’ll ever come across.

While sitting behind the benches, Popovici—who was gearing up for medical school—spotted a concerning mole on the back of the neck of Vancouver assistant equipment manager Brian Hamilton.

At that point, the action on the ice took a back seat to her mission to alert the staffer known as “Red” to the potentially dangerous growth and she managed to do so after showing him a message on her cellphone while he was heading into the locker room.

Her hunch turned out to be correct, and on New Year’s Day, the Canucks put out a call for help in the hopes someone would be able to identify her.

#HockeyTwitter, we need your help!

Please RT to spread the word and help us connect Red with the woman he considers his hero. pic.twitter.com/HlZybgOnjf

It didn’t take long for the internet to do its thing, as Popovici’s mother realized she was the fan in question and alerted the team to the fact. Nadia was in attendance when the two teams faced off again in Seattle on Saturday, and she got the chance to meet up with Hamilton prior to the contest so he could thank her in person.

An act of kindness towards another human that Brian (Red) will forever be grateful for.

Brian and Nadia had an emotional meeting ahead of tonight's game in Seattle. pic.twitter.com/xvld8x2ltz

"The reason for the letter (today) was that I really wanted her to know her persistence and everything she did to get my attention, she saved my life." -Brian (Red) Hamilton pic.twitter.com/XQO2ZsEAtA

However, that meet-and-greet had nothing on the surprise Popovici received during the game, as the Kraken and the Canucks announced they’d teamed up to reward her with a $10,000 scholarship for her medical school of choice.

Together with the @SeattleKraken, we awarded Nadia Popovici a $10,000 scholarship for medical school as a show of our appreciation 👏 pic.twitter.com/VgK8aMgJTA

It doesn’t get much better than this.