Nick Kyrgios Might Have Beaten Federer This Weekend, But He Was Distracted By A ‘Hot Chick’ In The Stands 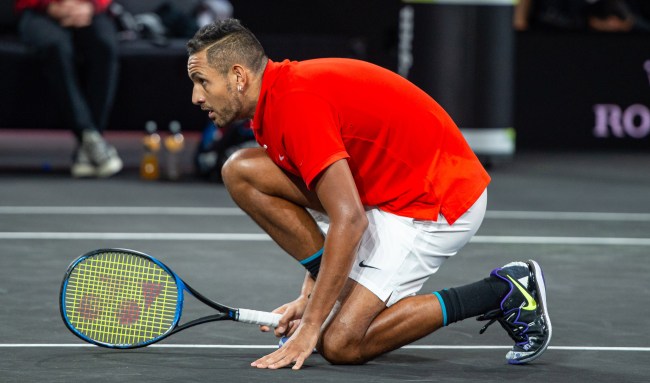 As far as I am concerned, professional tennis hasn’t really been all that great to watch ever since John McEnroe basically retired from the ATP tour in 1995.

No, I am not referring to his play. The 24-year-old Kyrgios is a decent enough player – he’s been ranked as high as 13th and is currently 27th – I am talking about his behavior both on and off the court.

Earlier this year, Kyrgios embarrassed a trash-talking fan in front of the girl he was with.

In 2017, the father of tennis star Chelsea Samways wanted to “knock out” Kyrgios for partying with his daughter.

Father Of 18-Year-Old Tennis Star Chelsea Samways Wants To 'Knock Out' Nick Krygios For Partying With His Daughter https://t.co/1ZIxdQ3W9Z

And in 2015, Kyrgios verbally abused his opponent Stan Wawrinka by telling him another tennis player banged his girlfriend mid-match.

So, as you can see, bro is entertaining AF in a sport where there aren’t very many entertainers these days.

Kyrgios’ latest awesome bit of misbehavior took place this past weekend during a match against Roger Federer in the Laver Cup.

After taking the early lead in the match, winning the first set 7-6, Kyrgios began to struggle.

After being blanked 40-0 by Federer, Kyrgios headed to the team’s bench and told Team World coach John McEnroe and his teammates, “I lost concentration, I saw a really hot chick in the crowd. Like, I’m being genuinely honest. I’d marry her right now. Right now.”

“I lost concentration, I saw a really hot chick in the crowd. Like, I’m being jarringly honest — I’d marry her right now. Right now.”

Reactions to this bit of news from those watching the match was … mixed.

I never want to miss a moment of his play. He’s the Happy Gilmore of Tennis and I think there’s a place for that in this world!

And that’s why he has zero majors

😂😂 this guy is a legend. A hot bird is a hot bird. He’s got a good eye @NickKyrgios