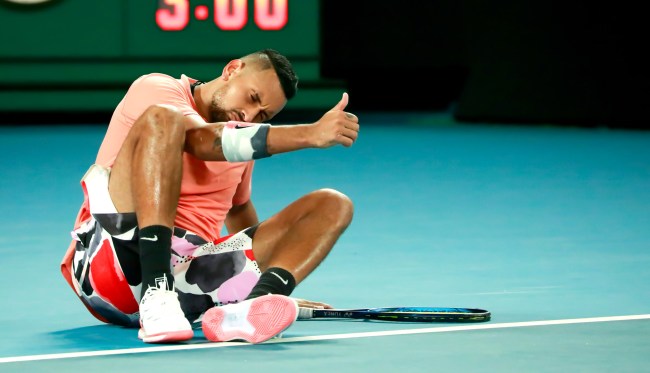 Nick Kyrgios is quite often referred to in the media as tennis’ “bad boy.”

He’s loud. He talks trash. He is easily distracted by beautiful women during matches. He is tight with the Bouchard twins. And at least one father of a female tennis player doesn’t want him to get anywhere near his daughter.

Which, based on a discussion Kyrgios had with with Twitch user babztv1 while livestreaming Fortnite, seems very understandable.

The 25-year-old Kyrgios, who recently split with his girlfriend, tennis player Anna Kalinskaya (pictured below), admitted during the livestream that he sleeps with fans “on a weekly basis.”

“Yes,” he replied when babztv1 asked if he had ever slept with a tennis fan. “In all seriousness if I’m not seeing someone, it’s like a weekly thing.”

Kyrgios added that he also has a certain preference when selecting a potential partner. “Eastern Europeans just have my heart on the get-go. Tall Eastern European’s I’m just like ‘take half my earnings’ [chuckles].”

The 21-year-old Kalinskaya certainly qualifies in that regard, standing 5-foot-9, and she is from Moscow so she’s technically Eastern European.

Sadly, the couple recently broke up and according to a message Kalinskaya wrote on Instagram in March, “We broke up. We aren’t friends.”

She also called him a “energy vampire” and wrote then deleted, “You’re not a bad boy, you are simply a bad person.”

When asked about the breakup, Kyrgios replied, “What happened to Kalinskaya? Nothing happened. We just went our separate ways. Unfortunately things didn’t work out. We had some fun memories.”

Of that there is little doubt. At least on his side of the ledger, because Kyrgios is probably in possession of considerably more “fun memories” than the average guy out there.