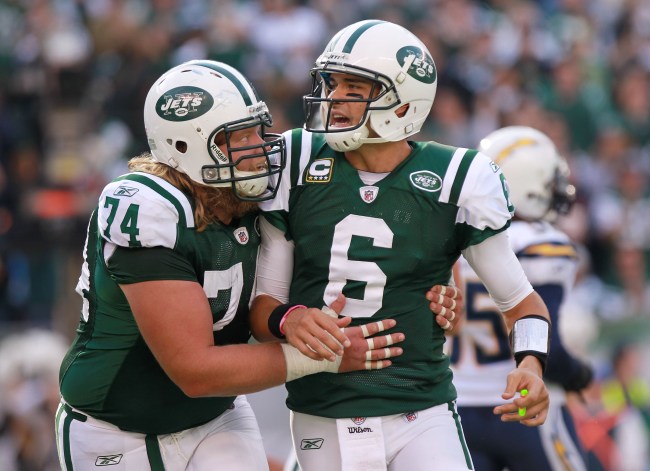 To pin the Jets’ long-standing misery on one person is like blaming Christopher Walken for how Gigli turned out.

Yes, gifting Mark Sanchez a three-year, $40.5 million contract extension in 2012 was unwise even for the Jets, but former special teams coach Mike Westhoff’s comments this week were all the way out of pocket.

“I’m sitting where I live, I live right on a golf course in Florida and there’s a lake right behind my house. I’m sitting here looking at it,” Westhoff said. “If Mark stood by my swimming pool, he couldn’t throw the ball in the damn lake.”

“[Then-general manager] Mike Tannenbaum came by my office one day, I said, ‘Mike, why would you give Mark Sanchez this big new contract?’ He said, ‘Well that’s what a championship-game quarterback is paid.’ I said, ‘Well if he had anything to do with us getting there, I probably would agree with you. But for crying out loud, he had nothing to do with us getting there.’

We sat down with Jets legend Nick Mangold on our Endless Hustle Podcast (full episode out Tuesday, 11/10) to discuss his thoughts on Westy’s nuke of the only quarterback who’s taken the Jets to the playoffs in nearly 15 years.

“I don’t like getting in a war of words with people because it’s never-ending.

I think Westoff dropping the bomb like that, “you couldn’t even hit the lake,” I think everyone takes that with a grain of salt because obviously Mark had some amazing throws. So if he couldn’t hit a lake, he’d be in the Tebow status, but you know Mark had some great throws.

And as far as the coach dropping bombs at specific players, usually you only see that from Rex, so Westhoff doing it was pretty funny. But it’s one of those things, everyone has their opinion and some people I think are trying to do things more for entertainment value.

I don’t know Westy’s reasoning. I don’t know if that was his lob to come back and coach the Jets. You always got to look at the why of why someone says something.

But I read that this morning and I was like, ‘Jeez, he nuked him! It was just crazy.”

After the butt fumble that was occurred nearly eight years to the day ago, the Jets have not only failed to make the playoffs, but they’ve only mustered up one winning season in that span.

Needless to say, tensions are high at MetLife.

Make sure to subscribe to the Endless Hustle podcast HERE so you can listen to the full interview out Tuesday.

P.S. Tebow, no hard feelings. I’m sure Mangold doesn’t mean anything by it. This was awesome.

On this day in 2012, Tim Tebow stunned the #Steelers with a 80 yard TD pass to Demaryius Thomas in the AFC wildcard game. pic.twitter.com/bk869F4co7