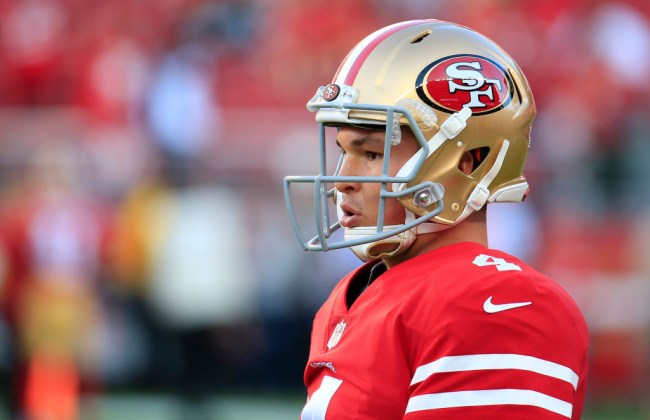 It has not been a great year for NFL quarterbacks as far as injuries are concerned and many teams are currently struggling to find guys who are able to step into a starting role (as long as that guy isn’t Colin Kaepernick).

The Buffalo Bills have gotten so desperate that they’re letting Nathan Peterman take the reins this week and the 49ers also found themsevles in a bit of pickle after C.J. Beathard injured his wrist just weeks after Jimmy Garoppolo tore his ACL.

San Francisco decided to turn to Nick Mullens, who’s been chilling on the practice squad for the past year or so and once had a doctor tape up his hand after he discovered a bone sticking out of his thumb following a play.

Mullens put on one hell of a show in his NFL debut and treated us to some fun bits of trivia in the process, including my personal favorite:

Do not adjust your sets: Nick Mullens now has as many TD passes as the entire Buffalo Bills team in 2018.

There’s no doubt Mullens got the game ball following the victory but that was far from the best thing that was bestowed upon him last night.

During the game, The Checkdown launched a campaign to get Mullens verified on Twitter, which is probably the ultimate prize someone on the platform can receive— a campaign that was so successful that the quarterback earned his blue checkmark before the game had even ended.

When you consider Mullens plays in San Francisco, there’s a very good chance some guy who waves the verification wand at Twitter was watching the game and decided it was time for the quarterback to get the respect he deserves.

As someone who is also verified on Twitter (nbd), I can attest to the fact that receiving the news is a dopamine rush unlike any other I’ve experienced in my life.

I’d like to formally welcome Mullens to the club.