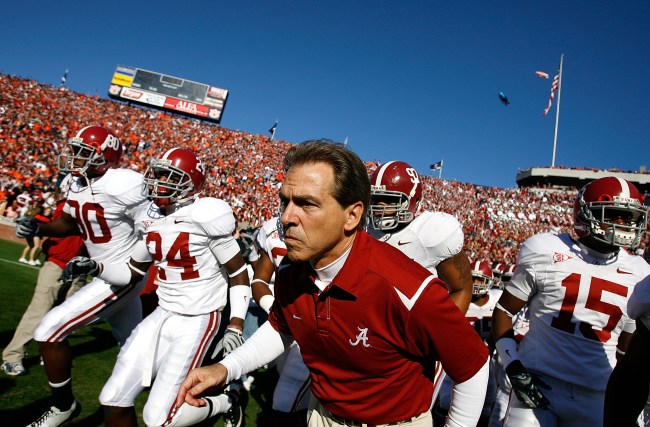 Alabama head football coach Nick Saban is, unquestionably, the greatest college football coach on the planet right now. He’s won six national titles in his career, and, in the past five seasons in Tuscaloosa, has led his team to four CFB Playoff Appearances with four Title Game appearances (winning two). So to say the guy is the Don of the sport would be an understatement.

That’s why what Saban said Tuesday morning is so important, because he told the cold hard truth about a problem that nobody in college football really wants to talk about if the season is cancelled or, as it currently stands, altered with several major conferences not participating. What exactly is it? The product on the field.

While appearing on ESPN’s Get Up on Tuesday, Nick Saban questioned how successful and/or competitive a spring college football season would be, wondering if high-level players opting out to protect themselves for the NFL Draft would lead to a diminished product and, in his own words, to JV-like games.

“I think one of the real consequences of this is, if you’re a junior or a senior and you have an NFL grade, are you going to play in the spring?” Saban said. “Or is that going to become sort of a JV season with a lot of these juniors and seniors opting out?”

“Everybody’s circumstances and situation is a little bit different,” Saban said. “I actually hate it for the players who won’t get the opportunity to play and compete and create value for themselves.”

Regardless of what you think about Saban or his Crimson Tide teams, he’s unequivocally right by talking about this issue, because college football will be a dumbed down version if it’s to be played in the spring. Imagine a Clemson Tigers team starting its backup quarterback all season long because star signal-caller Trevor Lawrence sits out to prep for the NFL — a possibility that has been discussed in recent months. Or, worse, Alabama’s usual loaded roster forced to play a handful of young players because the starters have nothing to gain by playing a college football season just months before the NFL Draft.

While everybody wants college football to be played as normal as possible — meaning it’d be in the fall — 2020 has been the year of uncertainty, and has forced us to reevaluate pretty much everything we do. It’s why the NCAA’s Chief Medical Officer isn’t too optimistic about the season being played at all, worrying that the current lack of testing in the U.S. is a major problem. It’s also why Nick Saban admitted that, despite his claim about a college football season being like JV should star players opt out for the spring, he knows the one opponent that’s the biggest for every team: The coronavirus.

“The biggest opponent that we have this year is going to be (coronavirus),” Saban said. “Because if we can’t get people to have the personal discipline to manage their personal bubble in a way that they can stay safe, which I think is very possible, then we’re going to have guys testing positive, guys in quarantine, and this is going to create issues on any team.”

With the Big 10 and Pac-12 already cancelling their seasons — with pressure from players and parents to overrule the decision —and a few projected first-round talents already opting out of a fall season, there’s no telling what the college football season might look like this year. But, if it’s delayed and played in the spring, Nick Saban is right in terms of what to expect; which won’t be the product any of us are used to.