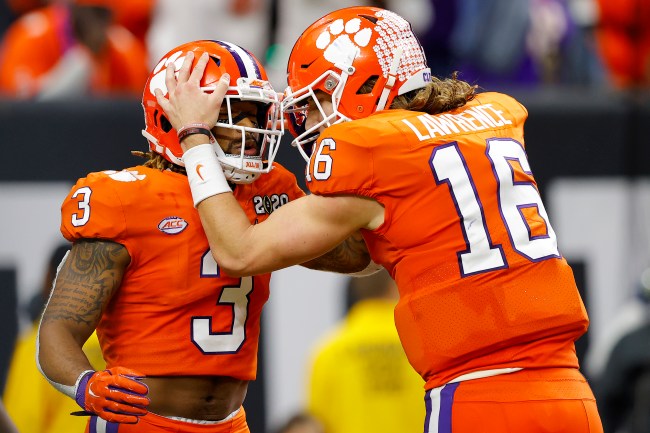 The outlook for a 2020 college football season is in pretty bad shape at the moment. Given the fact that the pandemic continues to surge and cases grow by the thousands across the U.S., getting a bunch of unpaid young people back on a college campus to play sports for our own entertainment doesn’t seem like the greatest plan. I hope I’m wrong and something changes in the next couple of months, but, at this very moment, things look bleak on having college football.

While that’s a harsh reality to accept at the moment, it’s something health professionals have been hinting at for the past few months. As more info comes out about the coronavirus — none of which is ever good — many college football players might be thinking about what’s next in their playing careers. And, according to one sports agent, some of “high-profile” guys are already starting to look at the NFL instead of even risking it again in college; assuming there’s even a season to be played.

Talking to multiple agents about that very topic, one told Ben Standig of The Athletic that he believes some of the most talented college football players are planning to “bail” on their schools, sign with agents and take the next 10 months to prep for the NFL. Take a look below at what the anonymous agent had to say.

“If this [COVID-19] really continues down the path that I think it’s going down, there is a very likely chance that there’s going to be some high-profile kids signing with agents in the next 60 days,” one agent told Standig. “They’re gonna bail.”

“I mean, I’m recruiting some high-end kids,” another agent said. “I talked to probably four of them last night, and they all echoed the same thing. Like, they’re done. This is over.”

As for the players, one agent believes top college stars like Clemson signal-caller Trevor Lawrence have nothing to gain by returning and everything to lose.

“There’s literally nothing to gain [by coming back] for these top players other than, you know, the greatness of Alabama football and Nick Saban or Dabo Swinney and Clemson football,” the agent said to Standig in part. “I mean, what benefit truly is [there] for you to play? There’s no benefit. All risk.”

If we’re being honest, none of this is probably too shocking. After all, even when there’s a full-blown college football campaign, some of the top players sit out after getting a minor injury — like Nick Bosa did during his last season at Ohio State. Still, since we’re in unprecedented times and there’s a ton of uncertainty surrounding what sports may look like in a few months, the agent’s claims are wild to think about.

We’ve already seen the Ivy League postpone its fall sports through 2020, and the Big Ten has reportedly discussed a conference-only schedule, so things continue to be fluid and change by the day. Some players, like Trevor Lawrence of Clemson and Justin Fields of Ohio State — both of whom are projected to be top-3 picks in the 2021 NFL Draft — have nothing to really gain from playing in a college football season, especially if it’s delayed and played in the spring.

Who knows what might happen, but it sounds like the sports agent has clearly had some conversations with a few of these high-profile players who aren’t willing to risk their health during such a wild time.