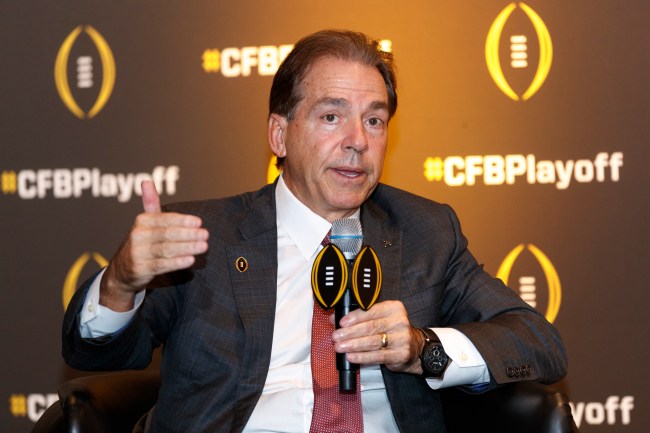 Nick Saban is, without question, the best coach in college football right now. Hell, the Alabama Crimson Tide head coach might be the best head coach that college football has ever seen, given his success at numerous schools, in different conferences and, more impressively, the length with which he continues to build national title-contending teams. To put it bluntly, Nick Saban runs the premier program in all of sports, college or pro.

With such heralded success comes a high standard, though, and Saban’s getting absolutely ripped by longtime college football analyst Paul Finebacum for showing a lack of judgement with a recent hire he made. Why? Because that recent hire was former Maryland Terrapins head football coach D.J. Durkin.

Before showing you exactly what Finebaum said about Nick Saban’s hire, here’s the quick backstory on Durkin. Under his watch at Maryland, one of his players, offensive lineman Jordan McNair, tragically died on the practice field. During the investigation of McNair’s death, several former and current players complained about the verbal and physical abuse that Durkin and some of his staff gave them, with an ESPN report describing it as a “toxic culture.” That, ultimately, led to D.J. Durkin being suspended and then, finally, after some deliberation amongst higher-ups at the school, Durkin being fired.

Well, after all of that bad press and a reported reputation of abuse towards his players, Nick Saban decided to hire Durkin as a consultant for the Alabama football team. It’s because of that decision that Paul Finebaum was more than just a little bit upset, which he more than showed during a segment on ESPN’s Outside The Lines today. Take a look.

"I think it is an absolutely terrible, embarrassing look for Nick Saban." – @Finebaum, on reports of ex-Maryland coach DJ Durkin consulting at Alabama. pic.twitter.com/Y6tj4IZhhT

For those too lazy to watch 57 seconds, here’s what Finebaum had to say about Nick Saban’s latest hire, per FTW.USAToday.

“None of us should be surprised by Nick Saban becoming the Father Flanagan of college football. He’s taken in Lane Kiffin and Steve Sarkisian after his fall from grace. He tried to hire Hugh Freeze last year, but the SEC reportedly stepped in. What do I think of it? I think it is an absolutely terrible, embarrassing look for Nick Saban.”

“This is a man that doesn’t need any more consultants. He has the Dallas Cowboys operation pretty much running in his building. There are consultants on every street corner in Tuscaloosa. And to invite the criticism, to bring this on him, I don’t understand. He’s the best coach in college football. This is the best program in college football, and this is a terrible look for the University of Alabama.”

For those unfamiliar with why Lane Kiffin, Steve Sarkisian and Hugh Freeze are relevant references by Paul Finebaum, it’s because, like D.J. Durkin, all three former head coaches had checkered pasts before Nick Saban decided to either bring them to Tuscaloosa to join the Alabama football staff, as he did Kiffin and Sarkisian, or attempted to, as he did with Freeze.

While Nick Saban is prepping his team for, yet another, run at a College Football National Championship, it’s hard to agree that he’s making the right move here by giving D.J. Durkin a chance to help his program. Unlike those aforementioned head coaches — who saw success — Durkin was just 10-15 overall in two seasons at Maryland, so the move is extremely questionable on a lot of levels. It’s not as if the guy was competing for conference titles or anything, or came from a high-profile program like some of the other previous hires (or attempted hires) Saban had.

The fact that Paul Finebaum was bold enough to call the hire an “embarrassing look for Nick Saban” should be enough to understand that this probably wasn’t something that the head football coach should have done.