Nick Saban Explains What Could Convince Him To Join Social Media 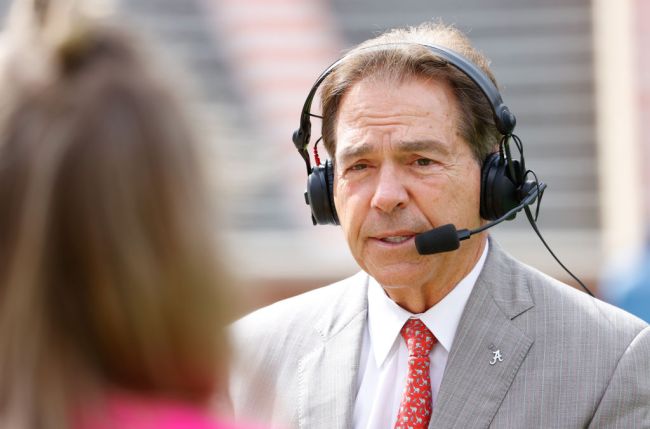 Nick Saban is a smart man. Not just when it comes to the x’s and o’s of football or how to get the best out of his football teams, but the smartest thing he’s ever done is stay off of social media.

In today’s world, a head coach to not have a social media presence is suicide, however. Coaches are constantly interacting not only with fans, but they’re also making impressions with high school recruits who spend every waking minute on their phones. Plus, you have the new NIL rules going into effect which has put social media influence at an even higher level.

For Saban to continue to dominate the recruiting trails with zero social media shows just how great his reputation and legacy are. It’s also worth noting he didn’t have his own email address until April of 2020.

Saban’s focus is evaluating recruits, forming relationships with those players, and then developing them when they arrive on campus. His process has worked out pretty well seeing as how he owns the most national championships in the history of college football.

The 69-year-old head coach revealed that the only way he’d jump on social media is if someone could convince him that it would help that process.

“If any of you out there can convince me that me having a Twitter account is gonna help us do a better job in either one of those things, then I might consider it. Otherwise, I don’t know why I would consider doing it,” Saban told the media, according to AL.com.

Saban Knows How To Build A Brand Even Without Social Media

Saban may not have any social media, but he does have a pretty good idea of how it works, especially when it comes to brands and players working with brands with the NIL rules.

“Which is the only way that anybody is gonna want you to endorse anything for them, is that you have a really positive, wholesome brand.”

Would you look at that? Nick Saban is spot-on yet again.