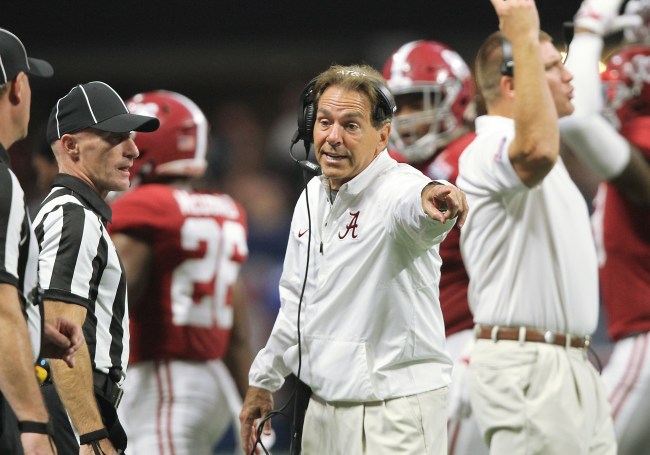 Nick Saban’s, arguably, the greatest college football coach to ever stand on a sideline. With six national titles at two different schools, LSU and Alabama, the guy hasn’t just sprinted ahead of his peers when it comes to winning, but he’s already lapped them about two times.

While Saban always seems to have control of himself on the sideline, every so often, he lets his guard down and can’t help but give one of those Bill Belichickian reactions. Whether it’s a passive aggressive look towards a player. An absolute stare down on one of his assistant coaches. Or, in the case of what happened this past Saturday during the Bama-Duke game, a expletive-filled rant on officials. Take a look at the video below showing Nick Saban doing just that.

One college football team after another out here struggling today… and there is Nick Saban already in mid-season form pic.twitter.com/hgMwyt7PH6

Head coaches expect perfection, whether from players, coaches or officials, and Nick Saban wasn’t about to spare the refs just because his Crimson Tide were beating the absolute snot out of the Blue Devils.

Unfortunately, Saban’s little rant had consequences. No, not from the NCAA or from the school for his outburst, but, instead, from his wife Terry, who actually punished the coach after seeing how many F-bombs her husband dropped while arguing his case with the refs, which was obviously all caught on TV.

According to the coach, Ms. Terry made him run on a treadmill for 20 minutes as punishment, with Saban detailing things to the media the other day.

“Ms. Terry made me run on the treadmill for 20 minutes,” Saban said. “The leadership group had a meeting, and they wanted to implement some disciplinary action. But it kind of got overruled.”

He also acknowledged that he was out of line when explaining his reaction.

“But I’m not proud of it,” Saban said. “I really am not. In all honesty, there was somebody in the white. It wasn’t a player, it was a coach. I thought they were upset because the players were celebrating a good play. That sort of fueled my reaction.”

Here’s video of Saban talking to reporters after word got out that his wife laid the hammer down on his F-bomb shenanigans — which, given the punishment, probably won’t happen again during any future games.

Mrs. Terry made Saban run on the treadmill for 20 mins for that unsportsmanlike penalty 🤣

Nick Saban is often the one putting people in their place. He’s the one who often gets the best out of people by constantly pushing them. He’s the one who rarely gets pushed around. Well, unless it’s by his wife, who clearly doesn’t like to see the head coach blow a gasket like he did on the sideline the other day. He, Nick, just use this as a learning opportunity.