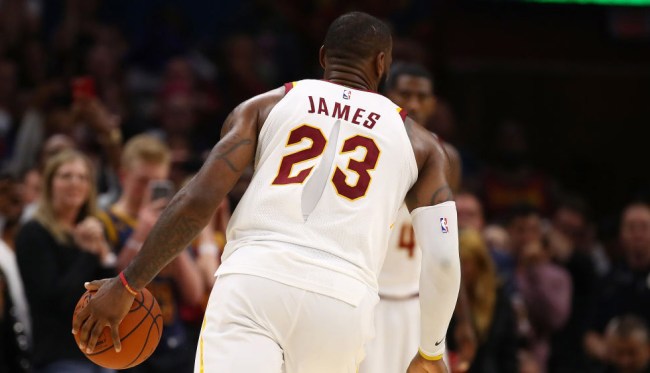 Back in the 1970s football players, mostly running backs, in college and in the NFL occasionally wore what was then known as the “tear-away jersey.”

It was exactly what it sounds like – a jersey that would literally “tear-away” when a defender grabbed on to it.

Here’s one example of this jersey being worn by Hall of Famer Earl Campbell..

The most famous player to wear these jerseys was Cleveland Browns running back and College Football Hall of Famer Greg Pruitt. Pruitt, who began wearing the jersey while carving up defenses for the Sooners, would reportedly go through 4 or 5 jerseys per game while playing in the NFL. In fact, it happened to him so often that in 1979 the NFL finally implemented what is now known as “The Greg Pruitt Rule” prohibiting the wearing of these jerseys.

What isn’t so obvious is why are the new Nike NBA jerseys being worn by players like LeBron James, Kevin Love, Draymond Green, Tyler Ennis, and Ben Simmons coming apart like they’re made of tissue?

Well… according to Nike, who released a statement Monday night to ESPN, they’re working on it.

“Nike has always put the athlete at the center of everything we do and we have worked hard to create the most advanced uniforms in the history of the NBA,” the company said in the statement. “They are lighter and deliver great mobility and sweat wicking characteristics, and the feedback from players has been overwhelmingly positive. However, during game play we have seen a small number of athletes experience significant jersey tears. We are very concerned to see any game day tear and are working to implement a solution that involves standardizing the embellishment process and enhancing the seam strength of game day jerseys. The quality and performance of our products are of utmost importance and we are working with the NBA and teams to avoid this happening in the future.”

The good news for Nike? Every player that has had a jersey tear so far has been under contract to them so the uproar has been kept to a minimum. And thus far, all of the new NBA jerseys purchased by consumers have managed to stay in one piece.