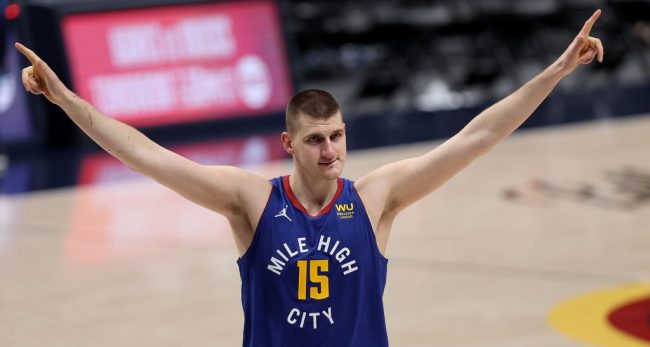 It was learned earlier this week that Nikola Jokic would be named the NBA’s Most Valuable Player for a second straight season. On Wednesday, the league made it official.

The Denver center capped off a fantastic year with a playoff appearance against the Warriors. The Nuggets lost the series 4-1 to end any championship hopes, but the season as a whole was largely a success.

Much of that was due to The Joker’s play.

The big man averaged 27.1 points per game, the 10th best mark in the league, while pulling down 13.8 boards and dishing out 7.9 assists. Jokic was the first player in NBA history to score 2,000 points, haul in 1,000 rebounds, and record 500 assists in a single season.

He edged out Philadelphia’s Joel Embiid and Milwaukee’s Giannis Antetokounmpo in the MVP voting to become just the 13th back-to-back winner in the sport.

Unfortunately, the Serbian was in his home country and was unable to accept the award here in person.

Or so he thought.

On Wednesday, the Denver Nuggets flew out to Serbia to surprise The Joker and present him with the MVP trophy.

Surprise in Sombor✈️🇷🇸 We flew to Serbia to surprise the BACK-TO-BACK MVP! And, wow, this moment was special. pic.twitter.com/aFvIEDgnSj

The Serbian was escorted back to his hometown stable by horse and carriage to receive his MVP award in person. And it’s hysterical seeing the 7-foot giant hanging off the side of that miniature wagon.

After being presented with the trophy, he was showered in beer by friends.

Jokic even took time to do an interview with the NBA on TNT crew to speak on winning the award. Here’s what he had to say.

"First time in NBA History that a KIA MVP honor has been given out in a Serbian horse stable."

We're gonna take a guess that you're right, @TurnerSportsEJ 🤣 pic.twitter.com/v5RZrEQbi3

From his stables to back-to-back MVP. He's been overcoming the odds from the beginning🙌 pic.twitter.com/Y6UtusJhZM

Host Ernie Johnson comments, “This is the first time in NBA history that a KIA MVP honor has been given out in a Serbian horse stable.”

He went on to reflect about his journey from that stable in Serbia to becoming a two-time NBA MVP. It’s been quite the ride for Jokic. Lucky for him, he no longer has to take the trip in an undersized buggy.