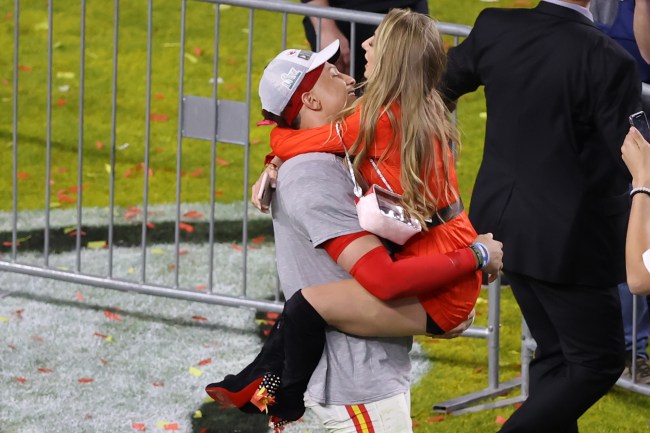 Super Bowl 54 — aka Super Bowl LIV — the most appropriate name vs. location in Super Bowl history, is officially in the books: Chiefs 31, Niners 20. Thankfully, though, this is not the type of column where we break down all the things that went wrong, like why the 49ers didn’t just run the ball late in the fourth quarter so as to drain the hell out of the clock and limit Mahomes’ opportunities. That’s for seven million other analysts to “discuss” and “debate.”

What we’re here to do is laugh. So, for starters:

Ellie, no. I am the “diabeetus” guy. https://t.co/ZsJrviWrwT

There are very few things I can guarantee, but I know damn well I won’t stop laughing at “is the Chiefs coach the ‘diabeetus’ guy” anytime soon. Just picturing Wilford Brimley randomly searching his own name on Twitter, during the Super Bowl of all times, and succinctly correcting Ellie to let her know that he is the “diabeetus” guy has me laughing in tears all over again.

Then there was Trump congratulating the Chiefs and the state of KANSAS on the victory while Terry Bradshaw was busy seeking out Patrick “Holmes” for a postgame interview during the trophy presentation.

Just beautiful stuff and the perfect amount of chaos, confusion and unintentional comedy after a pressure-cooker of a fourth quarter.

Oh, and there was all sorts of ass jiggling too, in case you forgot.

Highlight of the Super Bowl. pic.twitter.com/N3wT3bFL3l

Yes, the game delivered in all facets and certainly outdid last year’s abomination.

But alas, ’tis time — quite sadly — for the final installment of this season’s series of NFL Fashion Reviews. Though before we get started, in a rare moment of sincerity, I would like to thank everyone for reading and everyone who sent in potential candidates to use each and every week. It’s been a whole lotta fun.

Now let’s get this thing started, if ya’ smelllll, what Big Andy… is COOKIN’.

Is this the face of a man you want to let hang around with just enough time left to get some quick points and break your heart into a billion pieces? No. The answer is an emphatic NO. Now how do I know that and you know that but the 49ers did not? It’s a mystery that’ll be talked about until the next great sports crisis which — according to my notes — should be within the next 48 hours.

I do find it amazing though that Patrick Mahomes has single-handedly made Oakley Blades, a renowned staple for inept idiots like Jose Canseco, cool again. Yeah, buddy. Soak it all in and get yourself to a beach and, ideally, STAY THERE.

All kidding aside, I am not shitting you when I say these are cool again. Whether or not you can pull them off, well, that’s another story entirely.

The @49ers land in Miami ahead of the Super Bowl.

The stages of Jimmy GQ. First, seen above, is his arrival to Miami, looking fashionable and confident as usual. 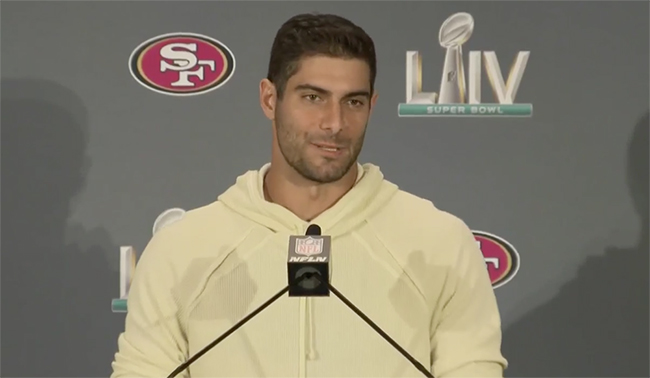 Then there’s Jimmy’s final press conference with the media before the game. Looking casual, but of the high-end ilk, and oozing confidence for days on end while women across the country look over at their husbands and internally — or possibly outwardly — say WTF.

And finally, there’s “Arriving To The Stadium” Jimmy, struttin’ around like he’s either making a major drop-off or scoring a major pick-up. Either way, one might go ahead and assume this sharply dressed gentleman has already been fitted for his ring based on the indoor shades and the natural, imposing confidence emanating from the photo.

NOTE: There’s no “Postgame Jimmy GQ” to be found anywhere just yet, but will update when available.

Mecole Hardman only came up with one catch for a measly 2 yards, but there’s no one on earth who’s also nicknamed “The Jet” that could’ve come up with a better entrance than what we have here. Standing fucking ovation, my friend. His pregame look was also a dizzying laser light show, featuring flamingos, palm trees and a few Chiefs logos sprinkled throughout. This dude is a straight-up inspiration to mankind.

An understandably deflated George Kittle still opted for the Joker t-shirt when he met with media after the game because he’s George Kittle. Had the Niners won, I can only assume Kittle would’ve strutted out there with three different WWE Championship belts thrown over his shoulders, a couple cigars, and conducted the entire Q&A in Macho Man Voice.

Travis Kelce arrived as only Travis Kelce can, wearing a custom chartreuse (that means green, guys) suit that had a comic book-like feel to accidentally — but appropriately — play off the Joker shirt of his good buddy and fellow fierce tight end, Captain Kittle.

You would never have expected it with all the characters and accessories involved in this photo, but Andy Reid serving as the annoyed, running-out-patience dad wins this round and it’s not even close. Look at that “just get me to fucking hotel room” face. Big Red is a national treasure for damn good reason.

This appears to be Chiefs offensive lineman Cam Erving. Going with the classic Kobe No. 8 jersey with the white-shadowed number is tough to beat. And whoever that is standing directly behind him is someone we need more information on, ASAP. What a commanding presence. Feel like that guy might only speak in grunts and burps.

"I lost my idol and I lost my friend. I just want to show him love."@Chiefs RB LeSean McCoy puts on a Kobe jersey in the locker room and shares what the Laker legend meant to him 💜💛 pic.twitter.com/3kw2Oa3NtC

LeSean McCoy, who was inactive just like the rest of us, also wore a Kobe jersey.

Kwon Alexander’s jacket is absolutely phenomenal — actually, STRAIGHT FIRE is necessary here — and it’s gonna be so god damn disappointing when I find out it retails for $3,500.

Gonna go ahead and take a guess that someone asked Arik Armstead to wear that vest. The thing is flying open and his body language indicates he gives less than a single shit as to how to wear it. All this dude wants to do is crush whatever’s left in the plastic takeout container.

Kinda feel like this one does the driving all by itself. However, a major shoutout to Chris Jones is warranted here, as he flat-out dominated in the fourth quarter, completely disrupting the Niners offense and swatting balls away like Mutombo in his prime.

This photo was taken in early November for a game against the Titans in Tennessee and it was definitely not referenced at the time. Looking at it now, it’s become quite evident that you’ll be needing a 25-point lead going into the fourth quarter against this dude. An absolute boss who knows he’s a boss and refuses to be denied. Kinda love it. And I HATE that I love it.

Another great shoutout to Mamba. Too bad Sanders was overthrown by 10 yards in what might’ve been the game-winning touchdown. But hey, he looked really nice and stuff.

The caption reads “Go Shop Link In Bio #DeeboSamuel.” Dude’s a rookie, a thriving one who’s gonna kill it next season, and already has his own clothing line. Meanwhile, players who have been in the league for 5-10 years are busy arguing on Twitter about their Madden Rating and eating Funyuns.

Back to Kwon Alexander because I need this chain energy like a needed a gallon of coffee this morning.

A smiling Andy Reid decked out in a red Hawaiian shirt honestly makes the world go round. If you can’t be happy for this guy, you’re kind of a dickhead. Actually, mostly a dickhead.

Was anyone else aware that the 9th Annual NFL Honors took place on Saturday night in Atlanta? Well, it did and holy shit, it was a sceeeeene, man.

The unanimous NFL MVP sure as hell looked the part. Watching Lamar and Mahomes duel it out for the next decade is exactly what we’ll need given Tom Brady’s rapidly approaching expiration date.

If you thought Saquon Barkley could do any wrong, you’d be wrong. Pretty sure half of L.A. would happily kill someone just to wear that jacket once.

Legendary NFL Hall of Fame “knock knock” guy David Baker has returned once again and it was downright glorious! Pretty normal that he’s the same height as the hotel room door.

Of COURSE Jarvis Landry doesn’t carry his own umbrella and instead has a woman six inches shorter than him carry it over his head for him. After all, the delicate diva is an esteemed member of the Cleveland Browns.

I’m fully aware there are two other stars in this photo as well as a lurking Ray Lewis, but when did it become official that Russell Wilson is a chameleon? Because I’m positive I’ve never witnessed this outstanding Billy Dee Williams vibe before. He looks like he just left the set of a highly impactful commercial for the Crown Royal brand.

Did DeAndre Hopkins just receive an award for writing a hit play or is this him attending an event hosted by GQ? Your guess is as good as mine.

The best Kobe tribute we’ve seen from anyone in the NFL and of course it came from King Henry.

He lives! And oh is he living. Cam gonna Cam no matter where Cam goes and what Cam’s doing. #Cam

This is on an entire different level. Congratulations to my guy @KyleRudolph82 and his beautiful wife @jor_rudolph on his 3rd consecutive Walter Payton Man of the Year finalist nomination. I’m always honored to dress this man but this one is extra special. #NFLHonors #BestDressed pic.twitter.com/ojTYUMZy5x

Kyle Rudolph, the only tight end in the NFL who doesn’t dress like he’s attending WrestleMania, knocked this shit out of the park in what many people are calling a Velvet Victory.

“Next week, on Miami Vice…”

There’s “Game Face Stefon Diggs” and then there’s, well, just make sure to swipe to the next photo in the gallery for this one. What a lively showman.

Tyrod Taylor is STILL in Paris wearing random shit and living his best life, this time in an assload of leather. At this point, I’d be surprised if he ever returns to the U.S.

Hey, Willie Cauley-Stein, you play in the NBA for the Mavs. Please concentrate on that, and that alone. Mahomes gets plenty of shine without you.

Annnnnd that’ll do it for the 2019 NFL season! Enjoy the enjoyment.