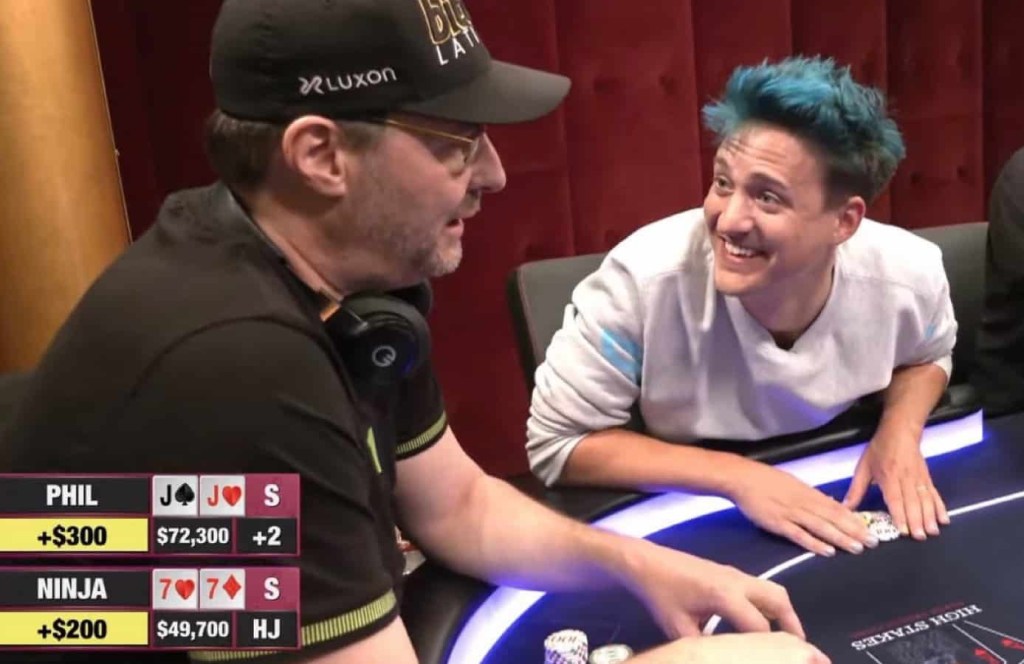 If you spend enough time sitting at poker tables you are bound to see some wild hands. I’ve played an infinitesimal fraction of the hands of a poker pro and I’ve still seen some truly absurd hands unfold like a runner-runner straight flush or quads against quads. This matchup of celebrities including Mr Beast, Ninja, Phil Hellmuth, Tom Dwan, Alan Keating, xQc, Alexandra Botez, Ludwig Ahgren, and Slime Machine included some WILD moments.

There were two particularly insane moments that occurred on the stream. One of them I don’t have the time or energy to explain. If you’re curious about what that drama was then hit up Phil Hellmuth’s Twitter page and you’ll see plenty of explanations but the gist is some thought he folded, he didn’t, and false accusations were tossed around.

The other particularly insane moment during the $100/$200 No-Limit Texas Hold’Em match full of celebrities was a hand between Ninja and Phil Hellmuth as Mr Beast watched on in astonishment. Ninja pushed all of his money in the middle and it was a hand worth $99,500 in actual cash (not just casino chips).

There’s some vulgar language here from Richard Tyler Blevins aka Ninja so if that’s something that bothers you then you might not want to watch. But it’s table banter and if you play poker it’s likely nothing you haven’t heard before…

Here’s another version of the same clip that was shared late last night:

One of the greatest moments in poker livestream history…

Ninja is one of the most popular streamers on the planet and has tens and tens of millions of followers and subscribers across various platforms. He threw out this ‘new meme template’ and suddenly the latest poker meme dropped. All of this took place while Phil Hellmuth is still sleeping (I think) because he was up late into the night/early into the morning tweeting about a misunderstanding at the table.

when the NFL kicker misses the field goal

When a homeless man asks you for change and you say “I don’t have any sorry” and he calls you Broke pic.twitter.com/EVsEsuUaEV

The responses are getting weirder and weirder…

when you're in the middle of carrying a league of legends game about to close it out, and my bra-less wife brings me a sandwich (not asked for) with chips as I get a double kill bot lane. pic.twitter.com/vIZaVa6D8k

As I mentioned above, there was some other drama in the High Stake Poker Productions $100/$200 No-Limit Texas Hold’Em match with Mr Beast, Ninja, Phil Hellmuth and others. You’ll have to check Phil’s Twitter feed for a full rundown of that. In the meantime, you can stream the full game above to see how everyone played.