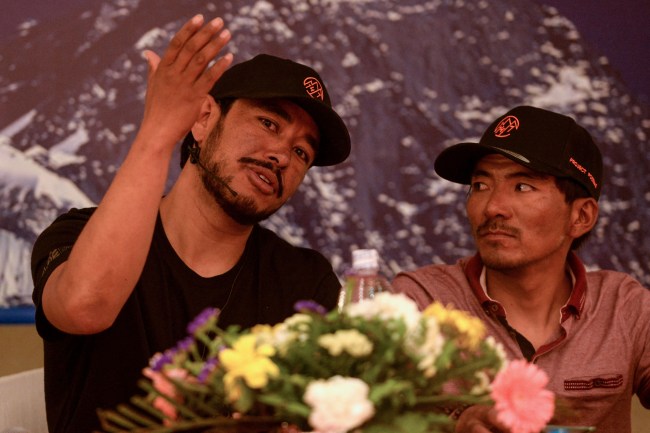 A 36-year-old Nepali man is officially the ‘World’s Fastest Climber’ after completing a mission that some serious climbers spend their entire lives attempting to accomplish. He hiked up the 14 tallest mountains in the world in a shorter period of time than any other person in history and marched his way into the world record books in one of the coolest ways possible.

It took him just over six months to travel the world and climb up the 14 tallest mountains on the planet after meticulous planning and training. His journey started in Nepal and ended in Tibet and ‘Project Possible’ took him exactly 6 months and 1 week. The previous record for climbing all 14 of the world’s tallest mountains was….almost 8 years. So he absolutely demolished that previous world record.

Truly, this is one of the most impressive records ever set. The average human being likely isn’t capable of climbing up even ONE of the world’s 14 tallest mountains. Even trained climbers would struggle to complete this task given all of the resources in the world.

All of the 14 tallest mountains in the world live above the ‘death zone’ which is named because life cannot exist above 8,000-meters or 26,000+ feet. Only 40 people in all of history have ever laid claim to climbing all 14 of these mountains throughout their entire lives…not in only 6 months.

Nirmal “Nims” Purja MBE now sits atop the throne of mountain climbing/mountaineering. Upon completion, he had this to say:

“I am overwhelmed and incredibly proud to have completed this final summit and achieved my goal of climbing the world’s 14 tallest mountains in record time. It has been a gruelling but humbling six months, and I hope to have proven that anything is possible with some determination, self-belief and positivity. I could not have made it happen without the unending support of my friends and family who have been in my heart this entire time. We started with nothing, but look how far we’ve come,” commented Nims.

“I believed in this project and I made sure to surround myself with people who believed in it too. This was never just about me, which is the reason I’ve been able to overcome some huge obstacles on this journey. By achieving this goal, I knew I could inspire people from all generations, across the world,” added Nims.

In total, it took him 189 days for the 14 summits spread across these dates:

It was on May 22nd that Nirmal Purja reached the summit of Mt. Everest, the same day there was that insane traffic jam photograph that made headlines around the world.

In addition to setting the new world record for climbing the 14 tallest mountains in the world the fastest, he also set six additional world records according to the Project Possible website. Those include:

— The fastest summit of the three highest mountains in the world

— The fastest summit of the five highest mountains in the world

— The fastest summit of the lowest 8,000m mountains (Gasherbrum 1, Gasherbrum 2 and Broad Peak)

— The fastest summit of the higher 8,000m mountains, with consecutive summits of Everest, Lhotse and Makalu in 48 hours (beating his own previous record of 5 days)

Nims wowed climbers worldwide along the way, documenting his incredible journey on Instagram.

Nims served in the British Special Forces as a Gorkha in Nepal which I think is really all you need to know about his physical prowess, mental toughness, and level of physical fitness. I could train for the rest of my life to try and pull this off in a year and probably still never come anywhere close.

I highly suggest you click here to visit the Project POssible website to see what this was all about and to read more about his incredible achievement and world record-setting adventure.