Northwestern Football Just Ran The Worst Fake Punt Of All-Time And It Was So, So Bad 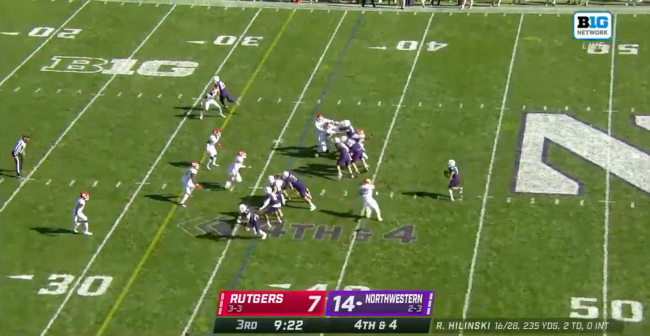 Ever since head coach Pat Fitzgerald took over the Northwestern football program in 2006, the Wildcats have been on a solid stretch of success. Although the private research institute in Evanston, Illinois has never reached the College Football Playoff or made a New Year’s Six bowl, it has had winning seasons in nine of the last 15 years and finished 10-3 in 2017.

This year, however, is to be determined. Northwestern is 2-3 with wins over Indiana State and Ohio and losses to Duke, Michigan State and Nebraska.

Whether the Wildcats will be able to bounce back in-conference and turn it around is yet to be determined. What we do know is that they will not be running a fake punt anytime soon.

Fitzgerald dialed one up against Rutgers on Saturday and it is legitimately the worst fake punt you have ever seen. It could have been worse and the punter could have fumbled or something like that, sure.

But putting any fluke or freak plays aside, this was the truly the lowest of the low. Derek Adams took the snap on 4th-and-4, ran forward behind his protection and was brought down for a loss of eight.

It was incredibly unsuccessful.

Oh no, that fake punt didn't go as planned 😬 pic.twitter.com/jlJI86m51p

For Fitzgerald to decide to go for it on 4th-and-4 with a lead was questionable, but you have to respect the guts. Unfortunately for him, it ended up going as terribly as it possibly could have without an errant snap or something similar. Yikes.