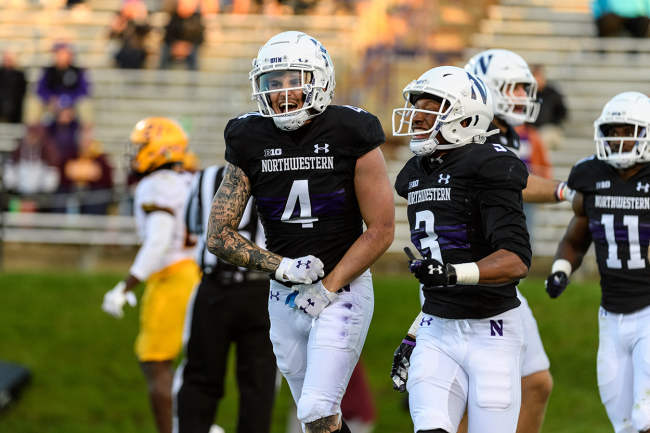 Northwestern football is returning to the Friendly Confines for the first time since November 20, 2010, when Chicago’s Big Ten Team hosted the first college football game in the historic venue since 1938. The Wildcats are set to play Purdue at Wrigley Field exactly 11 years later and it looks incredible.

When Northwestern first played Illinois in 2010, only one end zone was useable due to the dimensions of the ballpark. Renovations have been made this year, seating has been reconfigured and a dugout has been moved to make sure that a full field with two goal posts are in play.

The picturesque backdrop of the Chicago skyline sits beautifully beyond the end zone in right field and the on-field markings bring the entire canvas together.

Although Northwestern is 1-5 in-conference this season, perhaps the special venue will provide the extra juice that the Wildcats need to topple Purdue on Nov. 20.

If there was ever a game to get up for, it would be one played at a venue like this:

The famous ivy along the outfield wall has even turned to fall colors and you can practically feel the football weather through the photos.

Work is underway to transform Wrigley Field from a baseball field to a football field.

Northwestern will play Purdue on Nov. 20.

Because of the end zone configurations, the Cubs’ home dugout is gone. Northwestern will still use the facilities, but it will have to walk down an aisle to reach the field. It actually makes the team entrance even more epic.

The strangest part of Wrigley’s transformation to football? The #Cubs dugout is gone. @NUFBFamily will use Cubs lockerroom, but will walk down an aisle to enter the field. Visitors dugout is still intact. @cbschicago pic.twitter.com/u3snI7byq7

Here are some more looks at the field:

A view from the 300-level of Wrigley’s football configuration. pic.twitter.com/SeBkpHPg0y

Another look at Wrigley Field as the finishing touches are made to the ballpark ahead of @NUFBFamily’s game with Purdue on November 20th, which will be 11 years to the day that the park hosted its last football game between Northwestern and Illinois. @WGNNews pic.twitter.com/eW58oToJjQ

Wrigley Field in #Chicago getting a coat of @NorthwesternU purple ahead of the football game next week against Purdue. @NUFBFamily Let’s hope the weather for the big game is just like today. 🌞 pic.twitter.com/u3PtuKHC7C

Here what Wrigley Field looks like at the moment in football configuration. pic.twitter.com/wRvEsCXelf

Through the uprights at the Confines: pic.twitter.com/uRPm2CWJli