Officer Reportedly Wanted To Punch And Immediately Arrest Odell Beckham Jr. After He Was Slapped On The Butt 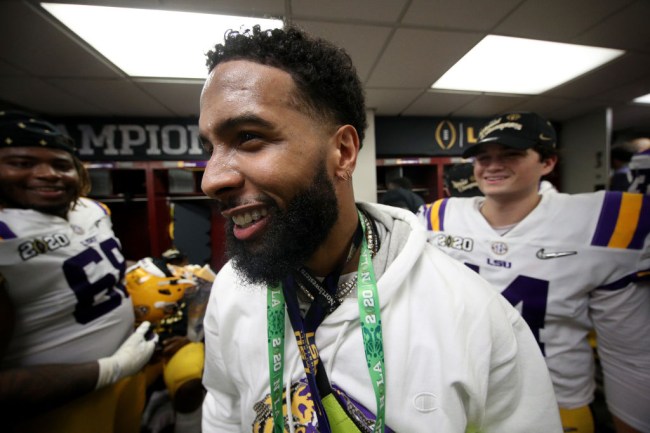 Yet another detail emerges in the Odell Beckham Jr. – police officer ass-slap saga.

As just a brief summary, after LSU took down Clemson in the National Championship game Odell Beckham Jr. celebrated with his alma mater Tigers. The celebration began with him handing out money to players after the win, but then the celebration continued into the locker room.

LSU decided to light up a few celebratory cigars, but that wasn’t going to fly with local police officers. They told the players to put out the cigars and even threatened to arrest players if they continued to smoke in the locker room.

Well, OBJ didn’t like that the officers tried to shut down the party so he went ahead and slapped one of the officer’s on the ass, which has now earned him a warrant for his arrest for battery.

Touching an officer, let alone slapping him on the butt, isn’t really the smartest of moves. While we’ve all seen the video plenty of times, we haven’t heard too much from the officer’s perspective as far as what his reaction was, until now.

According to NOLA.com, the lieutenant momentarily “wanted to retaliate by punching the offender” – later identified as Beckham – but didn’t. He also considered arresting Beckham but decided against it “due to the jovial atmosphere of the locker room.”

The sworn statement suggests the officer later realized who had slapped him after a cellphone video of the encounter had gone viral online. After calling police and undergoing an interview, the officer indicated that he wanted to press charges.

Yep, after all of this, it’s safe to say we’re only entering the very beginning of what this story is going to turn into.

The fact that the cop wanted to turn around and punch Beckham Jr. is a pretty normal though, but nevertheless, quite the development, to say the least.