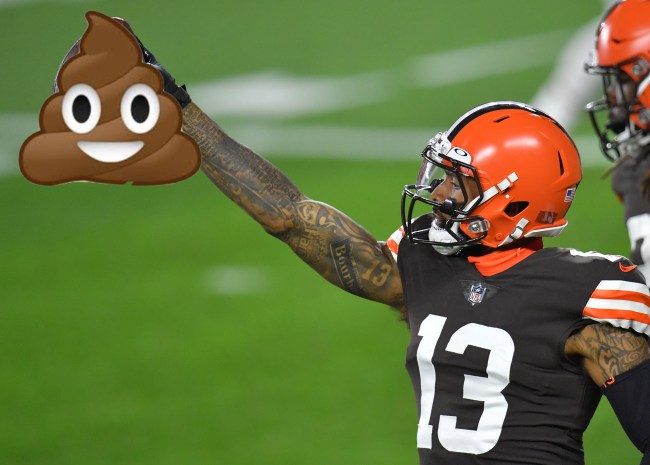 People are dying, social media platforms are using our data to ruin our lives, and the biggest story on the internet on Tuesday, September 8 was Odell Beckham’s alleged affinity for taking doo doo to the chest.

Odell has been eerily quiet since for a guy who’s accused of being a human port-a-potty, but in a recent sit-down with Maverick Carter, the Browns wide receiver addressed the allegations that, one more time, enjoys a warm keester cake on his chestal region.

Maverick broaches the subject cleverly, framing his question with the following precursor: “Because you are you, shit comes out in the media all the time…” before Odell interrupts him with “Literally.”

“I’m a caring person in a sense, so I wouldn’t want anyone to dislike me, especially for something that’s not me. So [before] I feel like I was always trying to come to my own defense and I just realized it was a lose-lose-lose situation.

It got to the point where, what am I going to say? It’s not going to matter. If I don’t say something, it means it’s true because I didn’t defend myself. If I defend myself, then I’m probably trying to hide the truth. What does it really matter?”

The accused then detailed his first-hand account of finding out he enjoys homemade Mississippi mud pies.

“I’m going to be honest, out of every rumor/situation, all the bullshit I’ve dealt with in my career, this was the funniest shit.

My friend sent it to me and I woke up, it was 7 in the morning, and I watched it and I called him back in tears crying. Like I have never, ever in my life heard this one. I couldn’t even believe it.

I was on the field and they were like, ‘Don’t tell me it’s true man, don’t tell me you like to get shitted on!’

I’m like, ‘I’ve never heard this in my life, out of all the rumors, I never could have imagined this is real.”

So there are two possibilities here:

Odell likes to do what 😳🤢 Na I don’t believe this woman. can’t be true 🤦🏾‍♂️ pic.twitter.com/rndfbLhbFW