Odell Beckham Jr. Does Call Of Duty ‘Self Revive’ Celebration After Second TD With The Rams (Video) 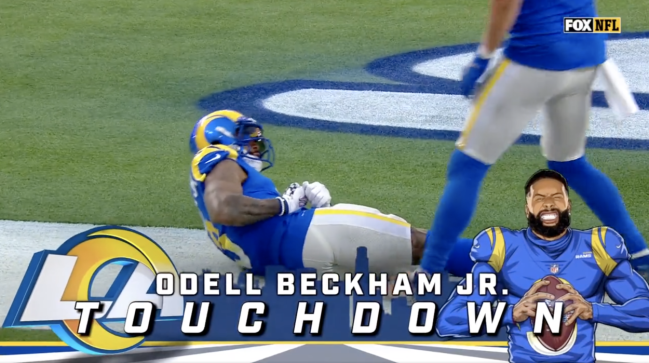 Odell Beckham Jr. scored his second touchdown with the Rams on Sunday. To celebrate, he broke out a celebration from a famous video game.

Although Beckham Jr. was not a big part of Los Angeles’ blowout win over Jacksonville, he found pay dirt late in the fourth quarter to all-but put the game away. On 2nd-and-goal from the (less than) one-yard-line, Beckham lined up in single coverage against Jaguars cornerback Nevin Lawson.

Matthew Stafford took the snap and looked nowhere else. He immediately turned to his right and lobbed up a jump ball.

On the receiving end, Lawson never stood a chance. Beckham went up and hauled in the touchdown over his defender who never even looked back for the ball.

Finding the end zone for the second time as a part of the Rams, Beckham ran over to celebrate with his receiving counterpart Cooper Kupp. After a quick chest bump, Beckham fell to the ground as if he was injured.

He was not. Beckham broke out a celebration straight out of ‘Call of Duty.’ He crawled along the ground, pulled out a pen and self-revived himself.

If you are unfamiliar with the reference, jump ahead to the 45-second mark in the video below:

Beckham’s touchdown catch was only his second reception of the day, but he made sure to make it a big one. Ever the showman, that Odell Beckham Jr!