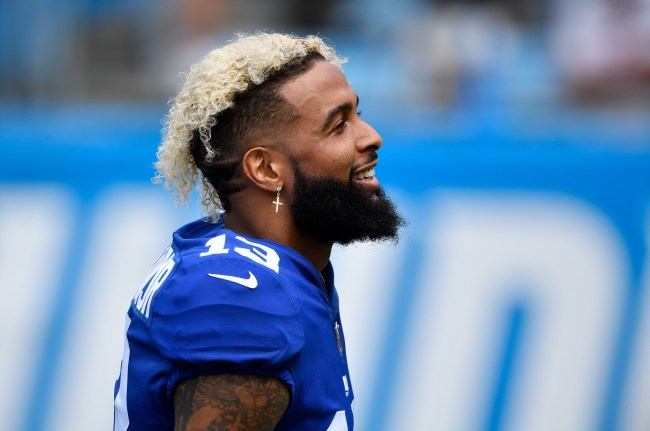 The New York Giants traded one of the most dynamic players in their franchise’s history this week after signing him to a gigantic contract extension that made him the highest-paid receiver in the NFL in August. What changed in seven months? SNY’s Ralph Vacchiano says that his sources with the team claim that the three-time Pro Bowler had become “too much of a pain in the ass.”

While Giants GM Dave Gettleman may never give the fans the full truth, what’s done is done, and the trade sent shockwaves through the entire sports world. No one appeared to be more shocked than Beckham himself, who, upon hearing the news told NFL Network’s Kim Jones, “At this point I have no idea what to think. I’m trying to process it right now.”

The 26-year-old has had some time to process the professional change, and Thursday morning took to Instagram to pen a heartfelt message to the Giants organization, staff and fans of the team. If Odell has any resentment towards the team that shipped him to Cleveland, he certainly didn’t lead on.

So many mixed emotions and feelings. This is all, a lot to process but it is reality. I don’t kno exactly what to say so just gotta keep it real and short. I want to thank the NY giants organization for giving me an opportunity to do what God put me on this earth to do , I want to thank the organization and the owners for everything and especially giving me my first chance to be a part of the NFL. I want thank everyone in that building from the kitchen staff to my main man Jośe! I loved you guys dearly and always will. I gave u my all every Sunday. To the fans, some happy , some not, I just wanna thank u guys for making my experience in NY SOMETHIN ILL NEVER FORGET! To the New Yorkers and REAL NYG fans… you guys will always have a place in my heart, a beautiful city .. a beautiful place Thank You for every last moment and experience. Without them, I wouldn’t be exactly who I am today ! LUV

As for his new team, Odell released a message to the press through the Browns organization saying he is “extremely excited” to play for an organization that is trending upward.

“I’m extremely excited about the opportunity to be part of this organization and the direction they are headed,” Beckham said in the Browns release. “I’ve already witnessed the energy fans bring in that city having been to some playoff games at The Q. Browns fans deserve a winning football team. This is a fresh start for me and it’s going to be great to join Baker (Mayfield) and Jarvis on this team. I will always appreciate the opportunity the Giants granted me and I’m thankful to them along with the fans and people in that city for supporting me.

“The Browns are an organization that is moving forward and it’s exciting to be a part of something special that’s in the process of being built. We have a lot of work ahead of us but I really feel like it’s time for the Browns to come together, start winning a lot games and I’m grateful to be a part of that going forward.”

The Browns’ odds to win the AFC are third best in the league going from 12-1 to 7-1 behind only the Kansas City Chiefs and New England Patriots. Odds to win the Super Bowl are the fifth best overall going from 30-1 to 14-1.

What a difference a couple years make.