Odell Beckham Jr. Was Traded Because He Reportedly Became ‘Too Much Of A Pain In The Ass’ 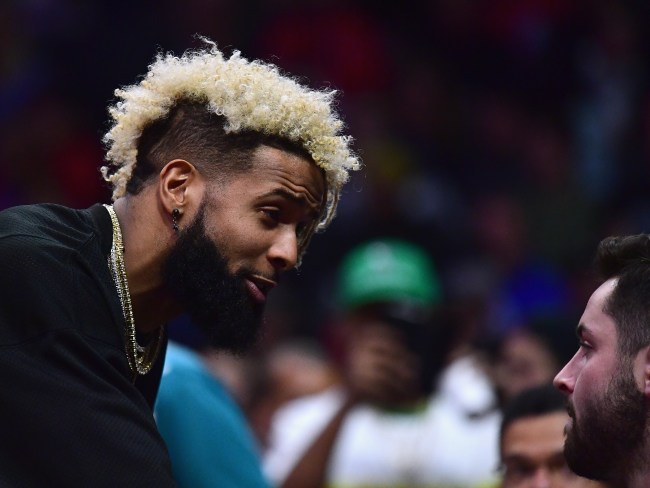 The Odell Beckham Jr. trade that sent the talented wide receiver to the Cleveland Browns yesterday sent shockwaves through the entire NFL. Hell, people in other sports were even going crazy over the move — like Cleveland’s own, LeBron James — because the wideout is that transcendent of a star, which leaves plenty of New York Giants fans probably wondering why the team made him become available in the first place.

Just a week or so ago, the Giants’ general manager, Dave Gettlemen, said at the NFL Draft Combine that the team didn’t sign Odell Beckham Jr. to a record contract last fall “to trade him,” yet, here we are a few days later with OBJ on the Cleveland Browns. So, what happened? While we may never really know why the Giants shifted their plan, SNY’s Ralph Vacchiano said that, according to sources, the move had nothing to do with football and everything to do with Beckham Jr.’s abrasive personality.

“He had become too much of a pain in the ass,” said one source familiar with the situation. “And there was a real fear that eventually it would get worse.”

It was “absolutely not a football decision,” according to one team source. The Giants are well aware that replacing Beckham on the field might be impossible.

While that’s just speculation from Vacchiano’s source, true or not, the fact is that Odell Beckham Jr. had his fair share of attention off the football field that took away from the New York Giants and, in a way, embarrassed them. From that social media video of him in Paris with a model and (possibly) some drugs, to his sideline behavior that saw Beckham Jr. punch an industrial fan, it seems like the Giants lost patience with his antics.

At the NFL Draft Combine, Dave Gettleman didn’t come out and mention Odell Beckham Jr.’s name while talking to the media about how to build a team and a strong, cohesive locker room, but now that the star wideout has been dealt to the Cleveland Browns, it seems like the writing was on the wall a couple of weeks ago, because here’s what the GM said.

“You’ve got to eliminate distractions,” Gettleman said at the combine, and not specifically about Beckham. “There used to be a thing I used to call ‘the a–hole quotient.’ The bigger the a–hole you are, the better the player you had to be. Plain and simple. It’s funny (but) it’s true. It really is. Think of the great players that you’ve seen around the league who have been just complete jerks. At the end of the day, what was the sum total of their career and their effect on their teams?”

“I’ve been to seven (Super Bowls),” Gettleman said. “And every single team had a great locker room. I’m telling you. I’ve been to seven of them and they all had great locker rooms. Part of the responsibility of a general manager is to eliminate distractions. Allow players to play and coaches to coach. And unfortunately, guys that have character issues create distractions. They do.”

Given all that has gone on with Odell Beckham Jr. off the field — as well as his strong personality on it — those words don’t exactly seem like an endorsement for the Giants to have kept the superstar wideout around during a rebuild. And, fair or not, it’s probably best that the two sides split during an offseason with so much uncertainty moving forward.