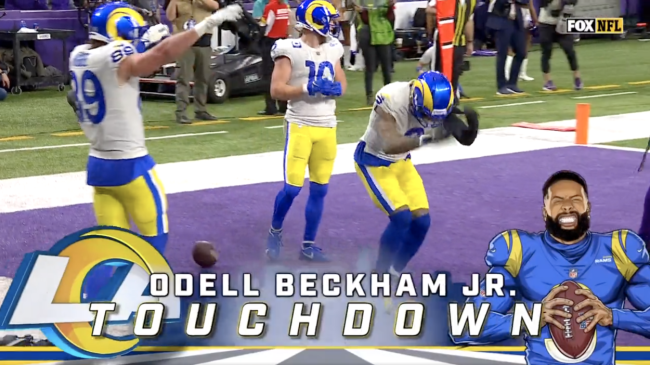 Whoever said that Odell Beckham Jr. doesn’t have it anymore was wrong. The 29-year-old Rams wide receiver found pay dirt against the Vikings on Sunday after running a nasty route and celebrated with a savage touchdown dance.

Beckham, on the opposing sideline, is good friends with Minnesota wide receiver Justin Jefferson. The two star wide receivers have a lot in common. They play the same position, both played their college ball at LSU and made a big impression early in their careers for their big-play ability and flashy style.

Prior to Sunday’s game, they showed mutual respect for one another by wearing each other’s t-shirts.

And then, during the game, Jefferson passed Beckham in the NFL record books for most yardage gained by a wide receiver in his first two years.

With his 23 yards against the Rams today, Justin Jefferson passes OBJ for the most receiving yards ever by a player in his first two seasons. 🙌

However, it was Beckham who had the last laugh. Los Angeles went on to win the game, in large part due to a touchdown catch from Beckham in the fourth quarter.

With just under 12 minutes left in the game, Beckham sauced Minnesota cornerback Cam Dantzler with a slick route. He put him on skates with a nasty cut.

What a route by OBJ against Cam Dantzler pic.twitter.com/lxyyNQT8IC

After finding the end zone, Beckham proceeded to celebrate in savage style.

Although the ‘Griddy’ dance does not belong to anyone, per say, and although it is a Louisiana thing, of which Beckham qualifies, the Griddy was made famous by Jefferson. He was the one who had it explode while at LSU and he is the one who has made it his signature celebration.

Thus, for Beckham to hit the Griddy in Jefferson’s end zone after scoring what became the game-winning touchdown, was ruthless. He knew exactly what he was doing by trolling Jefferson in his own home stadium.

OBJ does the Griddy with Justin Jefferson in the building! #RamsHouse

Beckham wins this round.