Odell Beckham Jr. Responds To Ray Lewis Saying He Doesn’t Have God In His Life 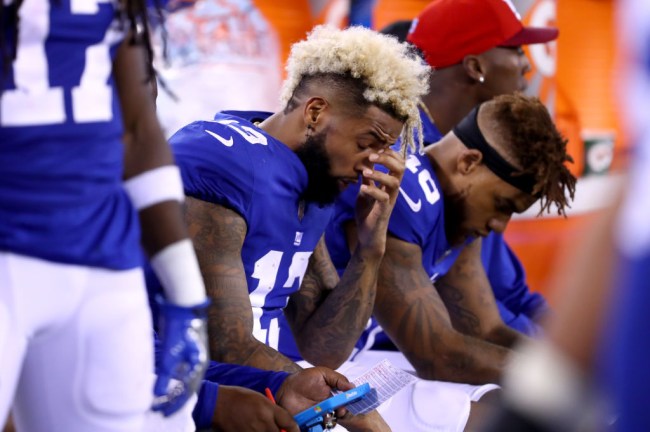 Ray Lewis evidently refuses to acknowledge that people don’t forget. Yes, it’s been over 17 years, but time doesn’t erase the fact that Lewis negotiated a plea agreement to drop murder charges in exchange for an obstruction of justice charge to turn on his friends after the stabbing murder of two men in the wake of Super Bowl XXXIV.

I’m not saying Lewis killed the men, but there was blood found in his limousine and to this day, the white suit he was wearing has not been found.

Either Lewis was in the wrong place at the wrong time or he is the most self-righteous murderer of all time. Who am I to say?

The two-time Super Bowl champion’s second act is playing the enlightened mentor to young NFL stars. Lewis has been in touch with Odell Beckham Jr. this offseason in an effort to provide guidance and life lessons for the controversial star. The Hall of Famer claims that at first, Beckham was receptive, but after time went on, he started to turn away.

During an interview with Colin Cowherd on Monday, Cowherd asked Lewis this question: “If you could sit down with Odell Beckham for 10 minutes, what would you tell him?”

“Where there’s no God, there’s chaos,” Lewis said. “Odell has removed God from his life. This is a kid that grew up under the covenant of who God really is and everything that he’s doing, he’s crying out for help. We have a lot of people reporting about him, but it’s always been the duty of elders to go back to help them, so that’s why I raised my hand and I told him, ‘I’m here. Whatever you need.'”

“I don’t care about religion, I’m talking about a foundation,” Lewis said. “When your foundation is disturbed, when everything you’re doing is the opposite of what got you to this place, then you’re making your own life hard.”

In a recent Instagram post, Beckham Jr. responded to Lewis’ jab with a video of Beckham and his loved ones bowing their heads in prayer accompanied with the caption: “The foundation was installed at birth … we will survive and prevail … ALWAYS. God willing …”

Lewis speculation of Odell’s lifestyle didn’t stop there. He wants him to stop hanging out with famous people.

“I tell people this all the time — I just spoke at this church a couple of days ago — you show me your crowd, I will show you your future,” Lewis said. “Man, Justin Timberlake ain’t never played no football. I love Justin, but Justin ain’t getting out there on that ground like that. These guys he’s hanging out with, they’re in studios all night. They don’t have to get up, they don’t have no discipline when it comes to athleticism. It’s a different discipline.”

Hear that Odell? Hang out with football players only. We’ll start with Aldon Smith.