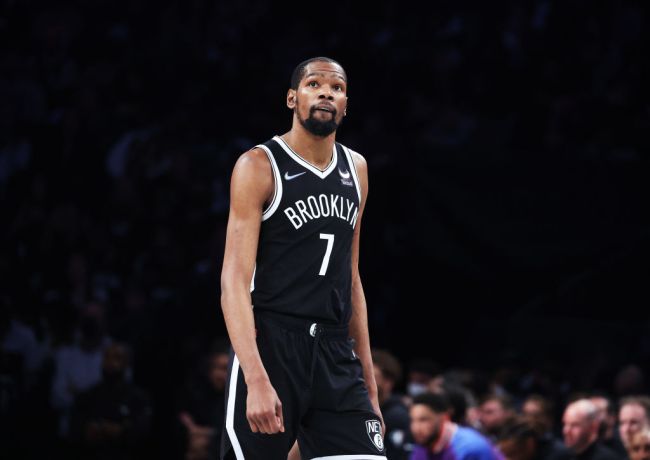 This offseason hasn’t quite gone according to plan for the Brooklyn Nets. The Nets surely entered the offseason hoping to get reinforcements for Kevin Durant and Kyrie Irving after a disappointing end to last season.

Then Kevin Durant requested a trade and the plan seemingly changed. The Nets began seeking a trade for him, but with an absolutely ridiculous price tag seemingly attached.

Now, it’s been over a month since Durant made his trade request and more and more teams are dropping out of the running for KD.

According to SNY’s Ian Begley, there is pessimism about a Durant deal getting done.

▪️ Kyrie Irving is "in a good place and comfortable" with the Nets right now@IanBegley with the latest notes in Brooklyn: https://t.co/O7vOXAyoIq pic.twitter.com/eUgyqJOBdn

The Nets are only hurting themselves by pricing teams out of trading for Kevin Durant because at this point, keeping KD shouldn’t be seen as a win for them.

After 2 years with a healthy Durant, we’ve already seen the ceiling for the Nets as they are currently built. In his first healthy season, he nearly led the Nets past the eventual NBA champs in the 2nd round of the playoffs without Kyrie or James Harden, but fell just short.

Year 2 saw KD and Kyrie swept out of the playoffs in round 1 by the Celtics. Since then, the Nets have added Royce O’Neale, TJ Warren, and Edmond Sumner and should finally have Ben Simmons available by the start of the season.

Those pieces will help, but what about that group leads the Nets to believe that the team that just got swept in round 1 is suddenly going to become a contender?

The Nets would be better off just moving on from this failed experiment and getting whatever picks and young assets they can get for KD while they can.

KD will be 34 before the start of next season. That really limits what the Nets can reasonably ask for and that reasonable price is only going to keep getting lower the longer they wait. Asking for a younger star and a treasure trove of draft picks just isn’t feasible for a few years of KD still at his best.

At this point the Nets are left with 2 options. They can either lower their price to something reasonable for a star at that age and give themselves pieces to build around for the future or they can hold onto him, continue to be just outside of contention with KD and Kyrie and have to start from scratch in a few years.

It should be an easy choice for the Nets to just start their rebuild now.