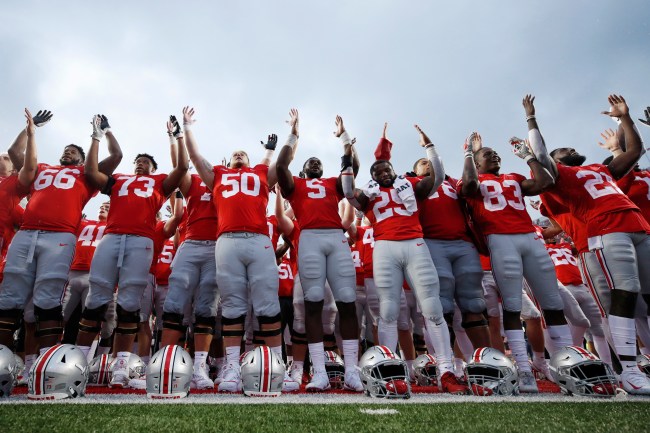 Ohio State football may not be dead just yet, Buckeye fans. While the school’s athletic director, Gene Smith, recently said that the program wouldn’t split from the Big 10 Conference for the 2020 college football season after the conference’s decision to postpone the season until (hopefully) spring, the football team is still holding out hope to play this fall.

We’ve already seen players like star quarterback Justin Fields start a petition to try and reverse the Big 10’s decision not to play, as well as another player’s dad, cornerback Shaun Wade, fly to the conference headquarters in Chicago to discuss the postponement of games until spring, and, shockingly, some of the moves may actually be working. No, seriously.

Although things are probably still a long way away from being overturned for Ohio State football to actually play a college football season in the fall of 2020, some optimism came from longtime college football journalist (and well-connected OSU alum) Jeff Snook, who posted a lengthy update to his Facebook account describing a situation where tOSU could play 10 games this fall. The school is reportedly working with at least five other Big 10 programs to try and do the same.

In this proposed format, each team would play the other five Big Ten teams who are participating twice — once at home and once on the road, beginning on either Sept. 26 or Oct. 3. The season would conclude by mid-December and there would no Big Ten title game in Indianapolis.

As of Tuesday night, the source claimed that Penn State President Eric Barron, Nebraska President Walter “Ted” Carter and Iowa President Bruce Harreld are on board with the new plan. The group hopes to convince two other universities, notably the University of Wisconsin and the University of Michigan, to join them.

“They really need to flip Wisconsin and Michigan to get to six schools and make this thing work,” the source said. “And they have only so much time to do it. They need to make progress and get it done in the next seven to 10 days.”

Wisconsin Athletic Director Barry Alvarez, who coached the Badgers from 1990-2005, is a strong advocate for the plan but has yet to convince UW President Drew Peterson, the source said. Michigan Athletic Director Warde Manual, a former Wolverine player under Bo Schembechler, and coach Jim Harbaugh also want to compete this fall season, but school president Mark Schlissel has so far opposed their efforts. Schlissel, who has a medical degree, spoke in support of “player safety” after the Big Ten’s announcement to cancel last week.

“This thing probably won’t go anywhere unless certain Big Ten presidents – like those at Michigan and Wisconsin – feel the pressure from their alumni, fans and especially their major donors,” the source said. “I understand that several seven- and eight-figure donors at Michigan are very unhappy with the Big Ten’s decision and are putting pressure on their president to change his mind. And they may be threatening to withhold their money.

“If they can get six schools to participate, the remaining Big Ten schools then have the choice to either join them or opt out of the season.”

Look, all of this might not mean a damn thing — especially with this coronavirus still raging on. It might just be a little bit of a tease. It may not lead to Ohio State football actually playing a fall season. But, shit, it does resuscitate the little sliver of hope fans have that, just maybe, things aren’t quite dead yet.

Although this new format would be weird AF — seeing Ohio State take on some of its longtime rivals twice to complete either a 10- or 12-game schedule — it’s sure as hell better than nothing. And while it wouldn’t lead to a traditional conference champion without the Big 10 Championship Game, would the NCAA recognize the participating programs in order to take part in the College Football Playoff? Presumably, and, fuck yes, that would be incredible.

Nothing’s set in stone yet, and we don’t even know if Jeff Snook’s report has legs, but, if it’s all true and this is something that Ohio State football is working on behind the scenes, it’s something that could rock both the college football world and NCAA in ways never seen before. Ah, please let this happen, football gods.