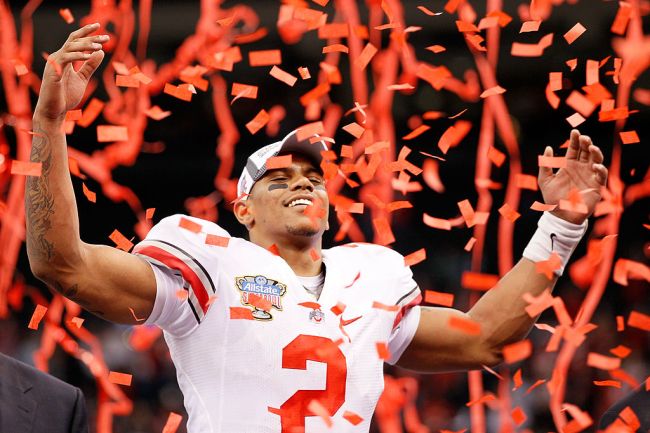 Quarterback Terrelle Pryor and four other former Ohio State football players are demanding that previously vacated victories and individual records be restored to the program by the NCAA.

Their statement comes after the governing body’s decision to allow athletes to profit from their Names, Images and Likenesses (NIL).

The time has come @NCAA @OSU_AD @OhioStAthletics @Channel75live @DPo8 @BOOMHERRON1 #solomonThomas @AdamSchefter we should get our wins back records back and legacy of @JimTressel5 back and not looked past it! NCAA suspended us but let us play in the sugar bowl win vs Arkansas pic.twitter.com/pGpEvJCbx5

How the Tattoo Five got their name.

Pyror, wide receiver DeVier Posey, defensive lineman Solomon Thomas, offensive tackle Mike Adams and running back Daniel Herron were disciplined for receiving free tattoos and impermissible benefits while at school. The NCAA ruled in 2010 that the five players acquired such benefits in exchange for memorabilia.

Pryor, the face of the nation’s No. 5 team, sold a sportsmanship award from the 2008 Fiesta Bowl, his 2008 Big Ten Championship ring and a gold charm given to OSU players after beating Michigan.

At the time, NIL was strictly forbidden. As the NCAA capitalized off of their athletes under the guise of “amateurism,” players were not allowed to sell gear, sign autographs in exchange for money, or accept any form of endorsement deal.

Today, the narrative has changed, and the ‘Tattoo Five’ are demanding that history be updated to reflect that notion. Under today’s NCAA bylaws, their then-illegal deals would be legal.

In one of the most controversial, inept rulings of all-time, the NCAA allowed the suspended Buckeyes to compete in the university’s 31-26 win over Arkansas in the Sugar Bowl on Jan. 4, 2011. The NCAA (probably, for legal reasons) knew what a hit it would take from a viewership and revenue standpoint if those suspended athletes did not play.

Thus, their suspensions began with the first game of the next season. But it didn’t matter because Pryor and some of his teammates left for the NFL.

In the wake of the penalties, head coach Jim Tressel resigned amid mounting pressure and the NCAA banned his replacement — Urban Meyer — from playing in a bowl game. It also added additional scholarship reductions and another year of probation on top of the program’s self-imposed penalties.

Players who had nothing to do with the ‘Tattoo Five’ were penalized by the NCAA, while Terrelle Pryor and those who left made millions in the NFL.

The Ohio State players’ plea closely resembles the request from former Heisman Trophy winner Reggie Bush. Bush was forced to return his trophy after an NCAA investigation determined that he and his family received improper benefits.

Now that NIL is in action, Bush wants his trophy returned and his records reinstated. He released a statement earlier in the month which had its sentiments echoed by Ohio State’s ‘Tattoo Five.’

Now, we and the ‘Tattoo Five’ can only sit and wait. Putting continued pressure on the NCAA to return previously vacated wins to programs who were penalized under the ancient, outdated rules on NIL might help.

However, the NCAA is so incompetent that it will:

As this new, young ruling plays out, it will be interesting to see what happens. Players like Bush and Pryor are household names on the collegiate and NFL levels, but they are both college heros.

Pryor, Bush, the Tattoo Five and many others have had their record and integrity tarnished forever. For what?! Something that should have been legal a long time ago?!

It will be curious how this ends up playing out, but Pryor and his teammates choosing to speak up is the first step in a long process of righting wrongs amongst the NCAA.

Just for fun, here is a reminder of just how good Pryor was in college: