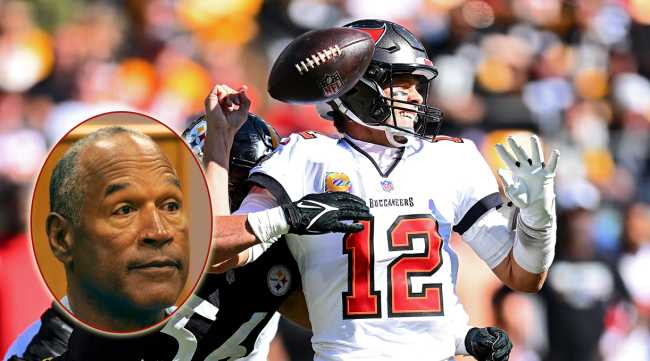 OJ Simpson is tired of people picking on Tom Brady so he took to Twitter to tell everyone to leave the Buccaneers quarterback alone.

After having arguably the best season of his career in 2021 at the age of 44, Tom Brady has been rather average in 2022 as the Tampa Bay Buccaneers have gotten off to a slow 3-3 start.

Brady has still done amazingly well considering he is 45 freaking years-old. He is averaging 275 yards per game passing (his career average is 266). He’s thrown for eight touchdowns with just one interception. He’s completing over 67 percent of his passes (his career average is a little over 64 percent). And he has a QB rating of 95.1 (just a hair below his career 97.5 mark).

Teams like the Steelers, Panthers, Bears, Jets, Texans, Broncos, Commanders, and Colts would kill to have a quarterback perform as well as Tom Brady has so far this season.

Of course, along with all those good numbers Tom Brady is putting up has come a boatload of drama, most of it related to his alleged marital troubles.

This week, Ben Roethlisberger said Tom Brady “didn’t look like he wanted to be out there” on Sunday.

He’s also caught flak for his sideline tantrums, missing a walk-through prior to the loss to the Steelers, and some of the bizarre things he’s said on his podcast.

Enough is enough though, according to The Juice.

“This morning, I’ve heard a little too much about Tom Brady,” OJ Simpson began his latest “Twitter World” video.

“Look, Tom Brady had retired. Retired. And in retirement I am sure he made some commitments in this fall. One was probably a vacation with his family at a time of the year that they’ve been unable to do that in the past.

“And the other one is probably to Bob Kraft and his wedding, which I’m sure was planned more than a couple of months ago,” OJ continued.

“Obviously, the Tampa Bay management was probably trying to encourage him to come back and when he felt that he kind of wanted to come back he probably said, ‘Yeah, I’ll come back, but I have a couple of commitments I have to honor.’

“Guess what? The management, the owner, the coaches, the GM of the Tampa Bay Buccaneers probably said ‘Fine. We can live with that.’ And that’s why you haven’t heard them do that much complaining.

“As far as him on the sideline this week, I gotta tell you, that’s Tom Brady. That’s what he’s always been on Sunday when his teams are not playing that well. He and his team. I’m sure he was saying ‘we’ to those linemen, not ‘you guys have to,’ ‘we gotta do better.’

“I would like to see, especially now, you would like to see a little of that fire towards his teammates and all from Aaron Rodgers. Green Bay right now looks as if that is something that they need.”

The Juice closed his latest diatribe by saying that he thinks “the Cowboys are legitimate Super Bowl…” then the video cut off, leaving everyone hanging.

I know people better listen to you, or heads are gonna roll.

“What’s your solution to get rid of Brady’s wife OJ?” tweeted another fan.

Live look in on OJ headed to Green Bay to get Aaron Rodgers fired up for the rest of the season. pic.twitter.com/TzDjRK6QQ2

Also, in case you were wondering, Simpson is also tired of all these weak roughing the passer penalties.