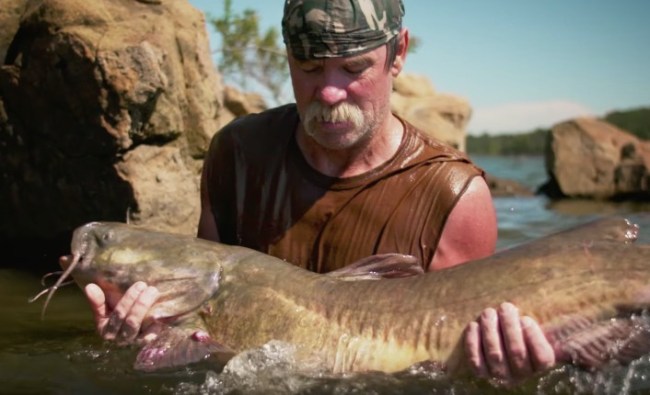 If you were to chalk up a list and rank every type of fishing from most to least hardcore then Noodling would be somewhere at the top of the list because it’s metal as hell. Basically, it requires sticking your hands in muddy water and digging around in holes on the river bed looking for catfish. There can be alligator snapping turtles holed up in there, snakes, etc. The goal is to catch a trophy catfish by hand without using any rod or reel.

In Oklahoma, Kaleb Summers and Marion Kincaid are rival Okie Noodling Champions. Marion Kindcaid was dethroned by Kalem Summers and after being knocked off his throne he decided to befriend his fellow Noodling champion. Their story is the focus of the latest YETI Presents: Bottom Feeders video, and it’s a fascinating one for anyone who’s ever been interested in Noodling:

For as much as I’ve written about Noodling here on BroBible I’ve never had the chance to go Noodling myself. We have plenty of muddy rivers here in Florida but the freshwater lakes, ponds, and rivers of South Florida are primarily Largemouth Bass country. I really need to add a Noodling trip to my ‘Ultimate Fishing Bucket List’ which is growing longer by the day.