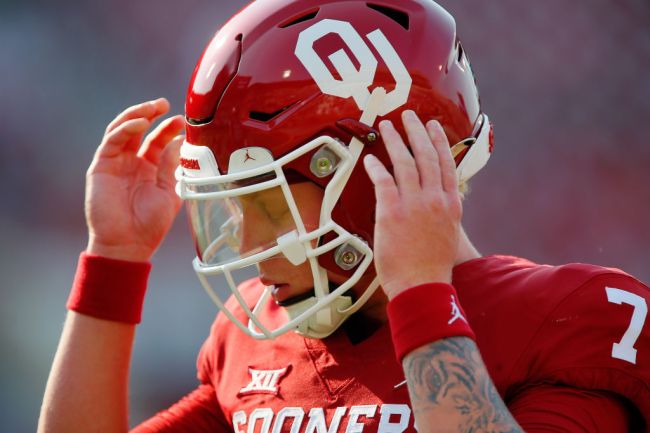 All signs point toward Oklahoma quarterback Spencer Rattler being benched in favor of five-star true freshman Caleb Williams for this weekend’s game against TCU. Rattler was yanked in the second quarter against Texas last weekend and has reportedly been out-snapped in practice this week. His father also gave a very telling look into his son’s future.

As things continue to trend toward Rattler riding the pine, it raises an interesting question. How does the 21-year-old’s on-field performance affect his value from a marketing standpoint?

CBS’ Dennis Dodd explored how Rattler has become a case study for NIL return on investment.

Rattler is one of the highest-paid athletes in the four-month (ish) Name, Image and Likeness era. His marketing is being handled by high-profile NFL agent Chris Cabott and his social media earning potential is estimated at more than $750,000 this year.

Now that he is (probably) a backup, does that change? Dodd ultimately found that no, although Rattler is not starting, the size of name alone still carries water.

And it makes sense. Regardless of how Rattler plays on Saturdays, people are going to continue to follow him on social media.

However, it really makes you wonder what his sponsors think of the situation. Take Fowler Automotive Group for example.

The dealership, which is one of the biggest in the Oklahoma City area, gave Rattler two cars. Even though his is likely being benched, Rattler will get to keep them both.

Jonathan Fowler, president of Fowler Automotive, spoke with Dodd about the topic.

“Whether [Rattler] starts or doesn’t start, the truth is we didn’t go into the partnership just for a return on investment,” said Fowler. “I hate that he’s having to go through this type of scrutiny as a student-athlete, but I certainly understand. I assume he does, too.”

While Fowler didn’t really say much, his response was pretty weak. He had a real opportunity to stand behind Rattler and the dealership’s decision.

Fowler could have referenced the numerical value behind Rattler’s promotion of his company, but he didn’t. Instead he said “we didn’t go into the partnership just for a return on investment.”

WHAT DOES THAT EVEN MEAN?!

Taking Fowler’s comments at face value, he says that his dealership’s NIL deal was not focused on being profitable. That’s just ridiculous.

Sure, giving away two cars for free is not going to get you any money back. But to say that the deal was not focused on the marketing aspect that Rattler provides — with hopes that his promotion would draw future business greater than the cost of the two vehicles — is simply absurd.

The bottom line is that, in the early days of the Wild West that is Name, Image and Likeness, Rattler’s value is not affected by him playing poorly. He gets to keep his cars for now, but that isn’t to say that the tie between the two won’t change in coming years.