Ole Miss Punter Mac Brown Has An Insane Amount Of Drip, Lays Bodies, And Gives Back With A Smile 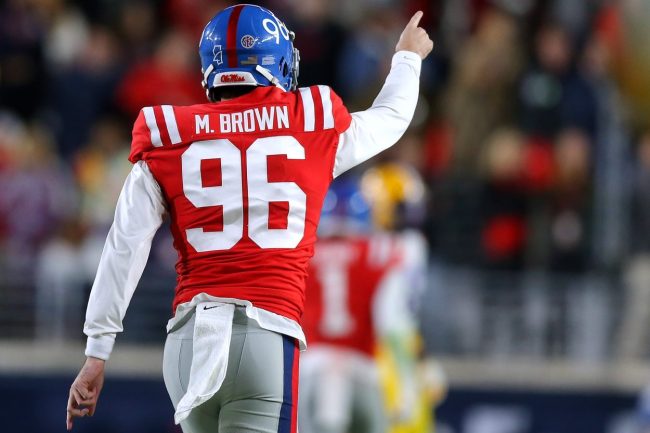 When Mac Brown was five years old, he wrote a very detailed essay on how to kick a football like former Packer Ryan Longwell. Now, 18 years later, the Eden Prarie, Minnesota-native is gearing up for his final game as the starting punter at Ole Miss.

Brown, who is known as a “bad boy” on the field for his ability to lay the lumber when necessary, has a cannon for a leg and an exuberant amount of drip. He also does incredible work off of the field for a cause that means a lot to him.

When Mac Brown arrives, his presence is felt.

One of the greatest traditions at Ole Miss is the ‘Walk of Champions.’ Prior to every home game, the players walk through a sea of people, down a red-brick path, from one end of the ‘The Grove’ (the tailgating mecca of college football) to the stadium.

In recent years, players have dressed up in their finest game day outfits. Brown never fails to show out. There is not another punter, perhaps even another player in college football with more drip than Mac Brown.

If it’s warm outside, he brings the heat:

If it’s cold outside, he’s iced out:

All the way down to the accoutrements, the ‘fit game is simply unmatched.

When Mac Brown isn’t perfecting his craft, he is giving back to the community with a smile.

As a seventh grader, Brown decided to join the fight against Amyotrophic Lateral Sclerosis when his friend’s father Michael Brandt was diagnosed with the debilitating neurodegenerative disease that ultimately claimed his life. To do so, he and his sister Bailey started the ‘Awesome Lemonade Stand’ in his hometown.

They initially set out to raise $500.

10 years later, the lemonade stand has grown to heights that they never could have imagined. Over the course of the last decade, Brown and the Awesome Lemonade Stand has raised over $148,000 for ALS research. Held every year in June, the 2021 fundraiser raised nearly $45,000 alone.

In addition to the work he does with ALS, Brown is very involved in the Oxford, Mississippi community. He is the President of the Student-Athlete Advisory Council and works with the Special Olympics, as well as other great causes like Reading with the Rebels and Hope to Dream.

As a result, he has received multiple accolades. Most recently he was selected to the 2021 Rare Disease Champion Team.

Earlier this year, he was also selected to the Allstate AFCA Good Works Team.

Can’t thank the @allstate @weareafca #goodworksteam enough for its additional donation to the ALS Awesome Lemonade Stand. Grateful for @Allstate for all they do. #AllstatePartner #ad pic.twitter.com/XiA9sAfW5S

Tim Tebow spoke about Brown’s work in the community and had the following to say about what he does off of the field:

“I love that he’s making doing good fun and cool,” he said. “You can see how infectious it was to his teammates. Doing good for other people can be fun, can be cool, can be exciting and can be inclusive. I think it’s so special what he is doing. It’s not just one day when you go on a hard mission trip, it can be in between practices, in between games. ‘Hey, we’re going to sell some lemonade, create awareness, do some fun stuff, we’re going to all enjoy it and have a great time,’ I love it.”

And over the course of the last three years, Brown has been selected to the Southeastern Conference Football Community Service Team three-straight times.

Needless to say, Brown takes every opportunity to give back off of the field. He is a champion of his cause and never turns down an opportunity to help out in the community, no matter how big or small.

When Mac Brown gets his foot on a ball, it’s a weapon.

Not only is Brown one of the top punters in the nation, but he plays with serious attitude. He talks the talk and walks the walk.

Over the course of his four-year career, Brown averages 43.7 yards per punt, has topped out at 65 yards of distance, and has accumulated more than 7,400 total yards on 170 career punts.

You already know what it is 🎯🤧 pic.twitter.com/uVvOXW6gAv

Look at this beauty from earlier this year:

Play of the night 🤩 pic.twitter.com/SO4gc3KBiA

Ever since Brown was a kid, hang time was a focus for him, whether he knew it or not. Although he didn’t start punting until his senior year of high school, growing up, Brown used to tell his mom to watch him as he booted the ball high into the air and run down the field to return his own kick.

That hang time trend has continued to his collegiate career and it has led to a lot of vicious tackles from his coverage team.

And if it weren’t for the fair catch, it would happen far more often.

Brown has a cannon for a leg and boot the ball with the best of them.

When Mac Brown is in the open field, he is a menace.

If Brown’s kick is returned, which doesn’t happen often, his opponents better look out, because he is coming with vengeance. Over the course of the past four years, Brown has earned the nickname “Bad Boy Mac Brown.”

For starters, he brings the energy on the sideline.

His most recent performance in the 20221 Egg Bowl against Mississippi State was next level. Brown went on a VICIOUS hitting spree and left bodies on the floor in his wake.

At 6-foot-4, 205 pounds, he could just as easily line up at strong safety, get down field and lay the wood, as he does line up behind the long snapper.

And when he makes a big hit, he lets the sideline coaches know exactly who he is. Bad Boy Mac Brown does not back down.

After six years with the Rebels, Brown’s career at Ole Miss will come to close in the Sugar Bowl on Saturday. When it is all said and done, Mac Brown will be known as an NFL-level punter who brought the drip, laid bodies, left opponents pinned at their own goal line, and gave back to the community and causes he cares about with a smile on his face.

Although Mac Brown is a bad boy on the field, he is also a great guy off.