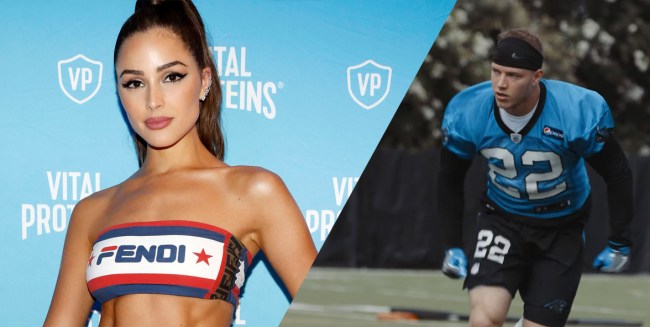 Last week we strongly speculated that former Miss Universe Olivia Culpo, 27, had officially moved on from 33-year-old Lions wide receiver Danny Amendola and traded up to the Panthers’ 23-year-old running back Christian McCaffrey.

After making a move by liking Culpo’s photos on Instagram, McCaffrey took things to the next level and was spotted actually hanging out with the beauty queen.

Now, this week, C-Mac made another big move, joining Culpo on a couple’s trip to the Las Ventanas al Paraiso Resort down in Cabo with Olivia’s friend, aspiring Sports Illustrated Swimsuit model Kristen Louelle, and her husband, ex-NFL running back Tyler Gaffney.

According to a source, they have their two friends to thank for bringing them together. “Olivia and Christian planned a getaway to Cabo for a few days with their two friends Kristen and Tyler, who actually were the ones that set them up. They had met before in previous social settings, but reconnected recently,” the source said.

“They have been texting nonstop since the beginning of last month, and this is the first vacation they have spent together. They have really hit it off and are into each other,” the source continued. “They have been spending time at the resort’s hotel and private beach, and adventured to Mango Deck where they spent the day drinking and dancing together.”

From the looks of video Louelle posted to her Instagram Stories, they appear to be having a very good time and the ladies are having an especially good time when the guys take of their shirts and McCaffrey shows off his Hulk-like physique.

“Whoooo! Take it off! Oh my God! Whooo hooo! Holyyy….!” one of the women is heard shouting at McCaffrey and Gaffney as they stripped down on a stage.

Gotta love the “I Eat Ass” slogan on the souvenir Culpo singles out. Dwyane Wade would totally approve.