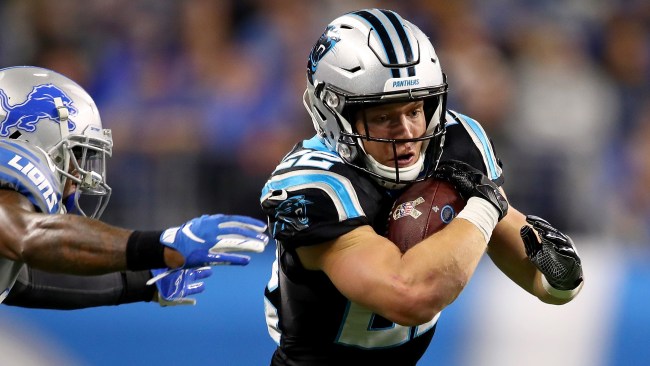 Earlier this week Carolina Panthers stud running back Christian McCaffrey described the offseason workout he’s using to get the results that have made him go viral for looking jacked AF this offseason.

Now, the 22-year-old McCaffrey, who set a record last year for receptions by a running back, has also decided to share some details about the strict diet regimen he’s been following to stay in such incredible shape.

2️⃣2️⃣ coming for it all 😤 pic.twitter.com/WQRIttO1qQ

McCaffrey recently spoke with Emily Abbate of GQ.com about his days and his diet.

McCaffrey says he tries to get at least nine hours of sleep so he can wake up on his own and speed up his recovery time.

He also talked about how when he first entered the NFL he learned via blood work that he had some food intolerances. This new data meant he had to cut out foods like chicken, tuna, wheat, and soy out of his diet.

As for what he eats now, McCaffrey says he tries to eat breakfast two hours before he starts training and then takes his supplements 30 minutes before he plays or works out.

A typical breakfast for him on a Monday, a straight linear explosive training day, sees him he eating egg yolks, no egg whites, and then maybe a sweet potato hash with some oats and fruit.

When is the next time you eat during the day?
After my first workout of the day, I’ll drink lots of water, have another scoop of pre-workout, and some aminos. Then, I’ll typically do some lifting. Can be anything from Olympic lifts to plyometrics, single-leg stuff.

And then lunch?
I eat immediately after the workout. Lunch could be something like a bison chili with potatoes mixed in. Maybe it has peppers and vegetables in some sort of a stew. I like soups because they’re so easy to eat. After lunch, I head to a recovery center near where I live. If I need any sort of soft tissue help, or if I’m feeling something on my ankle or hamstring, I’ll get that taken care of done when I’m there. And then I take a nap.

McCaffrey then explained that he likes to try to eat dinner at 7 o’clock to give his system time to digest and relax. That meal usually consists of eat something like a steak with sweet potatoes or avocado.

He also pointed out that he drinks at least a gallon-and-a-half of water a day, with half of a gallon of that coming before doing any working out. So, I guess he doesn’t need to wear sunscreen, right Tom Brady?

On his “recovery day,” McCaffrey takes in less calories because of the lighter program which includes things like stretching, sauna, cryotherapy and massage.

He did admit that he doesn’t always eat perfectly, as he says he has a serious jones for Cool Ranch Doritos. Oh, and Oreos.

Check out the entire interview over at GQ.com.