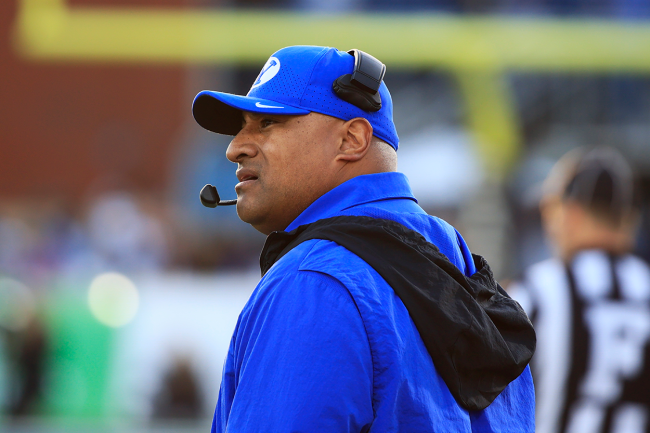 Less than a full week after Mario Cristobal was introduced as the new head coach at Miami, the head coaching search at Oregon is beginning to take shape. And after a new report, it is clear who the Ducks will not be hiring to take over the vacant position.

Athletic director Rob Mullens needs to hit a home run with this hire. He has quite a few people advising him throughout the process, and he will need approval of Phil Knight before he pulls the trigger.

As of right now, Oregon is reportedly considering a variety of options, including something truly insane. Among the large pool of candidates, UCLA head coach Chip Kelly and Cal-Berkeley head coach Justin Wilcox continue to be the most prominent names.

The Ducks have asked permission to talk with Kelly and an interesting detail in his contract makes it a very easy hire if they are willing to wait. Wilcox is said to have interviewed with the program on Thursday and things went well between both sides.

In addition to the two top names, BYU’s Kalani Sitake was also in the mix. However, per a recent report from Oregon Live’s John Canzano, things are not trending in the right direction to bring the Cougars head coach to Eugene.

Reportedly, Sitake interviewed for the job on Wednesday. Canzano “didn’t get the impression that the Ducks were wild” about how it went, suggesting that Sitake either did not interview well or expressed hesitation about leaving his current program— or both.

Regardless of how it went, interviewing Sitake was important.

Oregon legislature passed a law in 2009 that requires the state’s public universities to interview a qualified minority candidate before making a hire. Sitake is Tongan and fulfills the legal requirement.

That isn’t to say that it was a formality. Sitake has done great things at BYU and whatever program is to bring him on next would be making a great hire.

However, at this time, it would be a surprise if Oregon makes a move to hire Sitake. Stranger things have happened, but it is clear that as of right now, he is not the guy.