An Angry Oscar De La Hoya Challenges Dana White To A Fight After White Blocked A Superfight Between Him And Georges St. Pierre 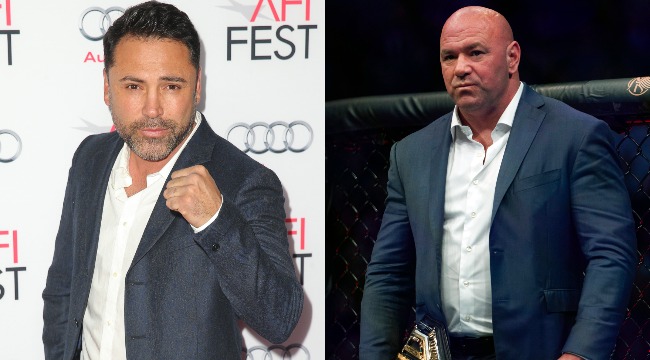 While Dana has remained mum on the situation, he likely nixed the fight due to its tie to the video-sharing social networking service Triller, who White has consistently blown off and claimed the company lied about the numbers Triller generated by Jake Paul’s fight with former UFC fighter Ben Askren.

In an interview with CinemaBlend, GSP was genuinely disappointed the UFC President put the kibosh on the fight:

De La Hoya was a little less diplomatic in his response, going as far to challenge White to a fight.

.@danawhite Quit blocking@GeorgesStPierre’s chance to fight.  How about we get into the ring first little B*#ch then after I kick your ass, I’ll fight a real man #DeLaHoyaGSP #LetGSPFight pic.twitter.com/sPKeXpHDDW

Triller President Ryan Kavanaugh attempted to sweeten the pot, offering Dana a $250,000 donation to a charity of Dana’s choice if he green-lit the fight.

Dana has yet to respond.