Oscar De La Hoya Fires Back At Dana White For Ripping Him, Calling Him A Cokehead: ‘Shut The F**k Up’ 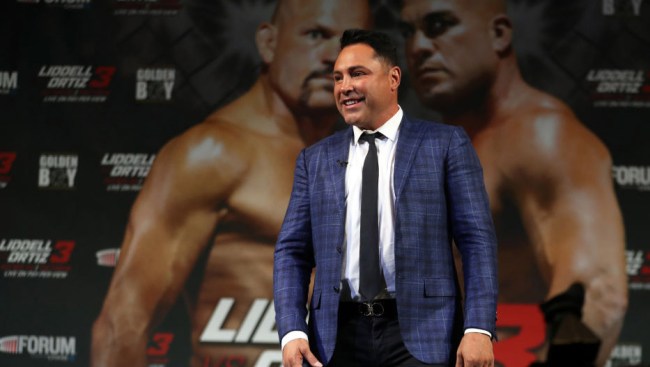 UFC President Dana White was none too pleased to see his friend Chuck Liddell take another beating in his fight over the weekend with Tito Ortiz. White was especially peeved with the California Athletic Commission, and more specificially, with Golden Boy Promotions owner Oscar De La Hoya, for letting the fight happen in the first place.

And when I say White was peeved, I mean he went total scorched earth on De La Hoya, calling the former boxing champion “Oscar De La Weirdo” and a “f***ing cokehead nutball.”

Not one to back down from a fight, De La Hoya responded to White’s comments, issuing a statement telling the UFC head honcho, among other things, to “shut the f**k up.”

“Dana is so small and threatened by our success with [streaming service DAZN] and now in MMA that he is bringing up news from a decade ago to try to stay relevant,” De La Hoya’s statement read. “Boxing has entirely rejected him. And MMA fighters are now realizing they don’t have to risk their lives just so he can get rich.

“Golden Boy and I are moving forward and are bigger than ever. Dana should shut the f**k up and try to figure out how to save his own company.”

Ohhh… You almost had me buying in until that last part, Oscar.

Here’s an idea. Instead of Khabib vs. Mayweather, how about we just put White and De La Hoya inside a boxing ring or the octagon?

Or better yet, let’s just combine the two ideas and have Mayweather, who also hates Oscar, fight De La Hoya again. Pretty sure that would result in more than a few pay-per-view buys.