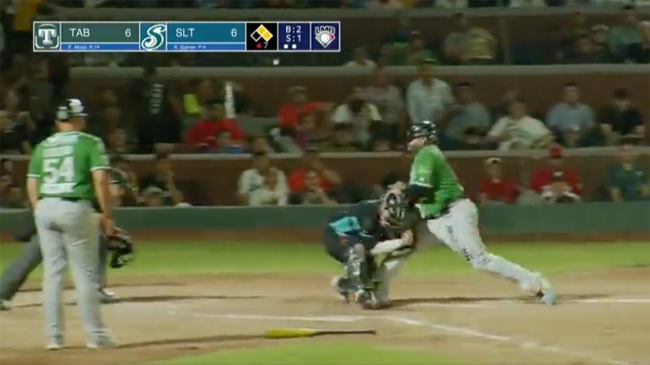 Pablo Sandoval is 35 years old and has not played in the MLB since 2021 as a member of the Atlanta Braves. That isn’t stopping him from continuing his baseball career.

Sandoval, who is known by many as ‘Kung Fu Panda’ or just ‘The Panda,’ is currently playing in the Mexican League as a member of the Olmecas de Tabasco. And earlier this week, he chose violence.

During a game against the Saraperos de Saltillo, Sandoval was on second base with two outs. When his teammate knocked one through the infield gap, he was off to the races.

At 5-foot-10, 268 pounds, he was absolutely hauling around the base path. And after getting the sign to head for home, Sandoval kicked it into high gear.

He was CHUGGING. However, the Saraperos got the ball in and got a perfect relay throw to their catcher in time to beat Sandoval to the dish.

That didn’t stop Sandoval from doing everything that he could to score.

In the Mexican League, there is not a rule that forbids collisions at home plate like there is in the MLB — the “Buster Posey Rule.” As a result, the hefty first baseman threw all of his weight at the catcher and absolutely CLOBBERED him in an effort to try and knock the ball loose.

It was like a freight train coming full speed down the tracks and only Hans Wilson was in his way. Although Wilson held onto the ball for a crucial out in a tie ballgame, he took the direct force of Sandoval’s decision to try and railroad him into the next century.

Sandoval has played for both Olmecas de Tabasco and Acereros de Monclova so far this season. He is slashing .281/.365/.444 while recording seven home runs, 29 RBI and 43 hits through 43 games and is not slowing down on the bases. Goodness gracious!