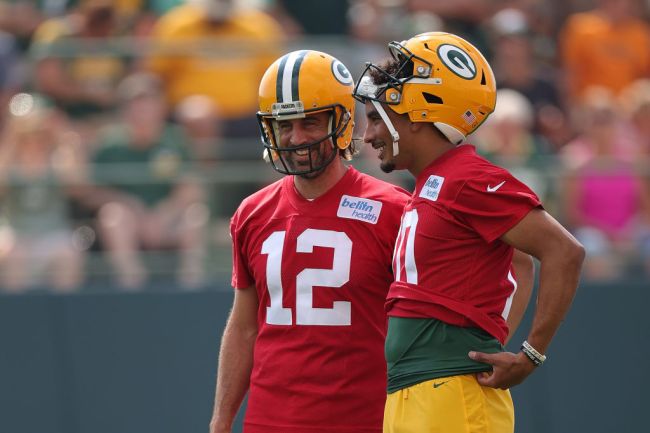 It’s been over 450 days since the Packers shocked the NFL and traded up to draft quarterback Jordan Love in the first round of the 2020 NFL Draft, yet we’re still talking about it today.

While we’ve learned that there’s a whole smorgasbord of reasons behind Aaron Rodgers’ frustrations with Green Bay, the team’s selection of Love plays a part.

You can’t blame Rodgers for being upset about Green Bay taking a quarterback 26th overall in 2020. Rodgers needed some help, and drafting his backup quarterback and the man that would likely replace him in the coming years did absolutely nothing to help him. So, here we are, turmoil in Green Bay.

Packers general manager Brian Gutekunst recently spoke with Albert Breer of MMQB and made quite an admission. Gutekunst claimed that he would have liked to communicated with Rodgers prior to the team drafting Love, but it “wasn’t a possibility.”

“Quite frankly, if that was even a possibility, I would’ve loved to do that,” Gutekunst explained about communicating with Rodgers before the pick.

“We didn’t go into that draft thinking, ‘Hey, we’re gonna target this and do it.’ If that was the case, we probably would’ve done that. That wasn’t reality. Would that have changed anything? I don’t know if Aaron, with the issues he has, if that’s really part of it. But a player like Aaron, in a situation like that, you would’ve loved to give him a heads up. It’s just that the way this thing transpired, that wasn’t a possibility.”

Gutekunst can say that the Packers weren’t targeting Love in the draft, but at the end of the day they traded up to get him. Love was clearly high on Green Bay’s board and the front office did what it thought was best.

The GM’s comments here certainly won’t win him any brownie points with Rodgers moving forward, that’s for sure.