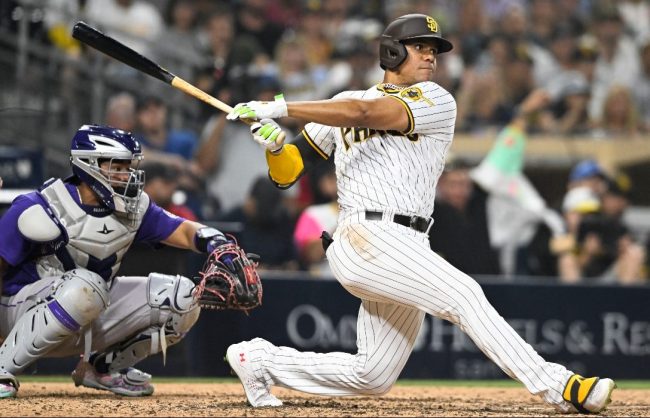 The San Diego Padres made some big moves right before the trade deadline, acquiring Juan Soto, Josh Bell, and Brandon Drury to boost the offense. They immediately made an impact on Wednesday, as the newly acquired Padres trio made history with one bonkers stat.

According to ESPN Stats & Info, San Diego’s new trio of hitters each reached base multiple times in their debut. It’s the first time a feat like this has been done since the year 1900, per Elias Sports. Not only did the Padres get a huge win with their new players providing immediate production, but this team is on the verge of becoming even better shortly.

Per @EliasSports, the Padres are the first MLB team since 1900 to have 3 midseason acquisitions all reach base safely multiple times in their team debut. pic.twitter.com/W2AMlwh6g0

It’s extremely impressive to see three newly acquired hitters make an immediate impact like this. The Padres couldn’t have asked for a better start for each of their debuts with the team. Even so, San Diego is on the verge of becoming a whole lot better.

While these three went off against the Colorado Rockies, Fernando Tatis Jr. is set to return to the lineup soon. The Padres made a big splash at the MLB trade deadline, as the front office also acquired Josh Hader from the Milwaukee Brewers. San Diego’s lineup and pitching rotation are completely stacked and will be at full force when Tatis eventually returns.

Keep an eye on this franchise as they are primed for a deep playoff run. It’s going to be difficult slowing down a team like this, as the Padres are stacked throughout. With that said, good luck to the rest of the league once the postseason starts. They’re going to need it when facing San Diego.