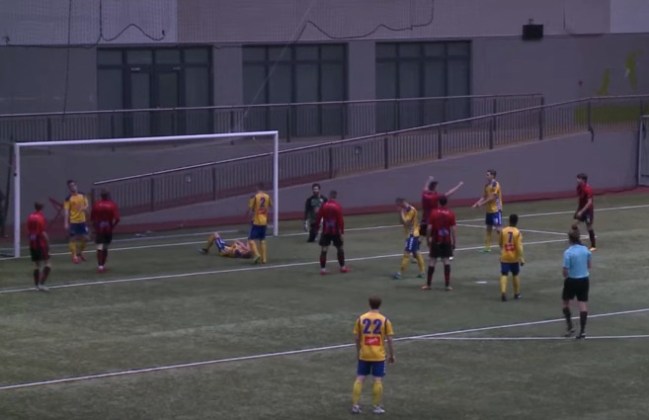 I know I shouldn’t be laughing over and over at this clip of an own goal during an Icelandic soccer game but I can’t help myself. You’ll soon see what makes this clip so perfect, and I don’t want to give too much away, so I’ll just say that I hope that dude who got all jacked up was okay but at the same time I won’t stop laughing at his pain and plight because it’s f**king hilarious.

This took place during a 4-1 thrashing which saw Knattspyrnufélagið Víkingur defeat Fjölnir. With the 4-1 victory, the Reykjavik-based soccer team finished in third place in the Icelandic Bose Cup. For the record, I’m just regurgitating this information from USA Today’s ‘For The Win’. I don’t actually follow Icelandic soccer. I’ve been to Iceland. I fucking loved Iceland as a place to visit and cannot wait to get back there again. But I’m by no means a devoted fan of Icelandic soccer.

With that said, I’ll be rooting with all my might for the Icelandic National Team in the 2018 World Cup with the United States failing to quality. I’ll be rooting for Iceland and Panama. Why Panama? Not because they’re the team credited with knocking Team USA out of the World Cup. I studied abroad in Panama City at FSU Panamá and am a huge fan of the country in general. Every Panamanian is beyond elated to send their first ever team to the World Cup and I’m stoked to root alongside them even if they did steal the USMNT’s spot away from us.