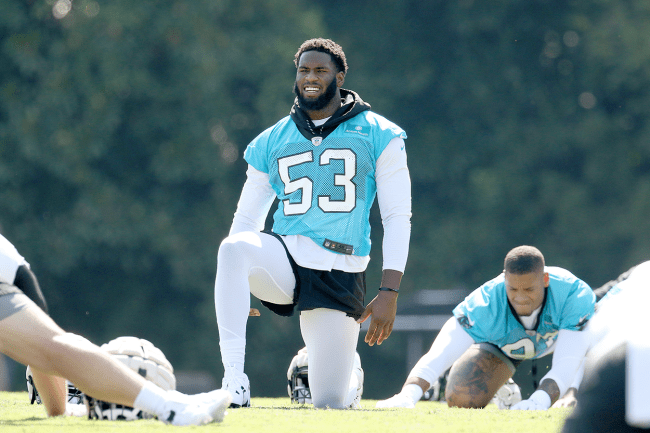 Carolina Panthers defensive end Brian Burns is quite the character. The 24-year-old is always up to something and Friday was no exception.

When star running back Christian McCaffrey took the podium to speak to the media, Burns hid in the crowd and waited for his turn to ask a question. Once he did, McCaffrey wasn’t so sure that his teammate was actually a reporter and wanted to know what network he is with, but Burns wasn’t willing to reveal that information and referred to himself as BB Love.

As he began to ask his first question, Burns was quickly interrupted. McCaffrey chimed in to say that yes, he is the best ping pong player on the team— assuming that was the question that was going to be asked.

But it was not. Burns wanted his running back to hype him up and set him up to do so.

“That wasn’t my question, I wanna know how it is going against Brian Burns?”

In response, Burns got a double-sided answer. While praising his skills on the field, McCaffrey dissed Burns as a person off of the field and said that he is just a bit strange.

The entire exchange could not have been funnier.